Have the Avengers found their newest team member? Rumor has it that Elizabeth Olsen may be joining the lineup for Age of Ultron. 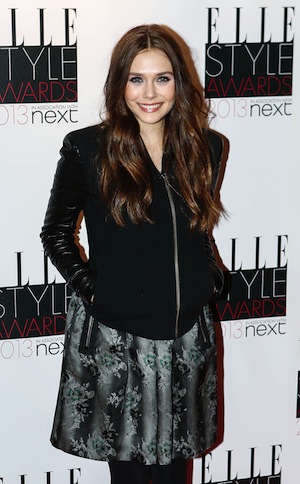 Mum’s the word when it comes to The Avengers sequel, Age of Ultron. Writer-director Joss Whedon and Marvel are trying to keep major plot points under wraps, but they’ve released a few teasers regarding casting.

First off, we know the main villain will be a sentient robot called Ultron. That much is revealed in the title. Second, we’ll see an influx of new characters including Wanda and Pietro Maximoff. They’re better known by their code names Scarlet Witch and Quicksilver. They’re twins who — unlike the rest of the Avengers — are mutants by nature.

For months there were rumors that Saoirse Ronan and Aaron Taylor-Johnson were up for the roles. But according to Bleeding Cool, Ronan is no longer in talks and has passed on the part. Who’s next in line? They’re reporting that Elizabeth Olsen is Whedon’s new pick.

Their sources claim that Olsen would have to tackle a ““European” accent for the role. That’s understandable considering both Wanda and Pietro were raised amongst the Romani people. In the comic books, the siblings originate in the X-Men series as their father is Erik Lehnsherr aka Magneto.

As the Scarlet Witch, Wanda can use magic and alter reality. Meanwhile, her brother Quicksilver has the gift of superhuman speed. Think of him as the Marvel version of DC Comics’ The Flash. We believe both Olsen and Taylor-Johnson would be great for the roles.

On a side note, due to legal red tape, Whedon and Marvel won’t be able to reference the characters’ X-Men origins. The X-Men film rights are owned by 20th Century Fox, whereas The Avengers are under Disney’s control. It’s going to be tricky, but in the comics, Scarlet Witch and Quicksilver spend most of their time with the Avengers, so it could work.