Glee Season 5 is set to be an emotional one after the death of Cory Monteith. However, according to Jane Lynch, the memorial episode is a beautiful thing. 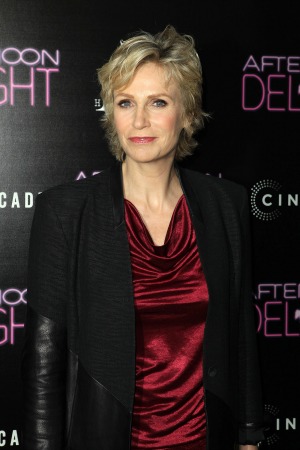 Glee creators have previously mentioned that their latest season would pay tribute to late star Cory Monteith and Jane Lynch said the memorial episode is beautiful.

Lynch tweeted on Wednesday that the script was the “most beautiful thing” and thanked series creator Ryan Murphy and executive producers Brad Falchuk and Ian Brennan.

The actress, who plays cheerleading coach Sue Sylvester in the hit series, revealed that she read the script on Wednesday, and is very emotional and grateful to the show’s creators and writers for the way they have chosen to pay tribute and say farewell to Monteith’s character, Finn Hudson.

Earlier this week, Lynch told the New York Daily News, “[The script] is at home waiting to be read. Gosh, I have no idea how to do it.”

Lynch has also said that filming the tribute episode on Friday is going to be very emotional and difficult to get right.

“It’s really sad. They have a big job ahead of them.”

Murphy had previously said he would not focus on the drug and alcohol overdose of Monteith and that the tribute episode would instead celebrate his character, Finn.

Murphy told Deadline, “There were a lot of things that we had to decide — how are we going to deal with his death? At one point, we were going to have his character die after an accidental drug overdose — that was something we had considered.”

“But we have decided that we’re not going to have him pass from that. Basically, what we’re doing in the episode is we are not telling you yet, or maybe not at all, how that character died.”

“The idea being, how somebody died is interesting and maybe morbid, but we say very early on in the episode, ‘This episode is about a celebration of that character’s life.’ That might be weird for some people, but it felt really exploitative to do it any other way.”

Glee will return for its fifth season Sept. 26 with a two-part Beatles episode, followed by the tribute to Monteith.