Amanda Seyfried doesn’t go for the good guys, because as she has recently revealed, she prefers mysterious men with emotional issues. 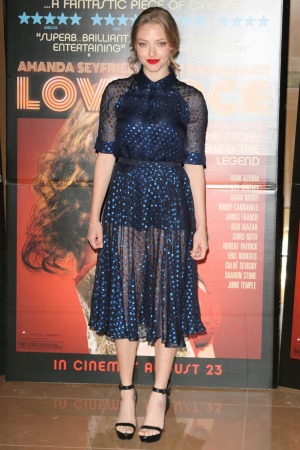 Although, it appears Seyfried is also getting attention for something else — her taste in men.

Seyfried is reported to be currently dating actor Justin Long and has admitted that she likes bad boys who are emotionally damaged because she likes to believe she can change them.

The Lovelace star said she is a hopeless romantic and will not settle for a man who is unable to flatter and seduce her.

Seyfried revealed to LOOK magazine, “I can fall deeply in love and sometimes that’s dangerous as you become very vulnerable. I’m still inspired by Claire Danes and Leonardo DiCaprio in ‘Romeo and Juliet.'”

“Love is a wonderful and powerful force that brings people together. I’m still waiting for a great love that is going to change my life.”

Seyfried added, “My best friend and I are attracted to creeps because they’re interesting and mysterious and they provide us with this rush and a need to fix them. It doesn’t make any sense — it’s a weird psychology.”

Can you relate to Amanda Seyfried’s desire for mysterious men? Tell us in the comments below.