The girls attend the school’s hoedown hoping to track down information about A, as always. Instead, Hanna finds a stalker that just might save her mom. 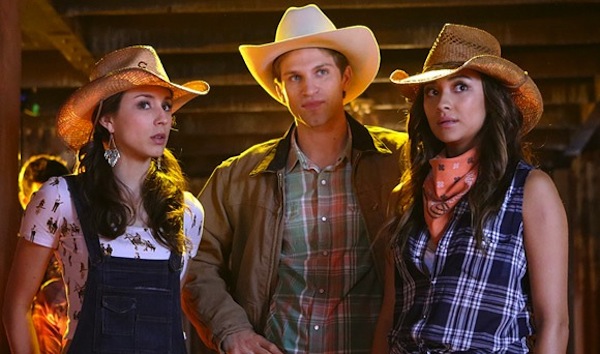 Caleb (Tyler Blackburn) is turning in his red coat for the ABC Family spinoff show Ravenswood in just one episode, leaving Hanna (Ashley Benson) without a man. Kind of. His exit is apparently left open-ended so don’t count out true love just yet. We’re keeping our fingers crossed.

In the meantime, Pretty Little Liars introduced us to a new character tonight named Travis, who has an eye for Hanna and a big wad of cash to help her mother find a new lawyer.

A moth to a flame

Toby gets in his car with Spencer (Troian Bellisario) and a song with his mother singing starts playing. It’s a CD from A.

A then texts Toby an address and a picture of Dr. Palmer’s car. He wants to go to the car, thinking maybe Dr. Palmer’s notes from his sessions with his mom are inside. Spencer thinks Toby needs to cut off his ties with A. She warns him that he is just being manipulated. He doesn’t want to hear it.

Spencer meets with the other girls at Alison’s, and they want to know what’s going on with her lately. Spencer admits A is giving Toby gifts and tells them his mother may have been murdered.

The girls think CeCe was the one living at Alison’s house and go to investigate the crawl space for evidence. As they are searching, someone starts shoving knitting needles through the peep holes. Then they hear the person leave. Emily (Shay Mitchell) wants to move out of the house and in with Spencer right away.

Emily remembers a time when Alison told her a story. Alison used to break up with her friends’ boyfriends for them sometimes, and Alison told her one time she had a gun pulled on her by one of the guys. Emily wonders if CeCe had Alison break up with Wilden for her and things went wrong. Then CeCe came back to Rosewood, Wilden tried to hook up with her, and she had to get rid of him.

We flash to a scene where CeCe is on the phone with someone. There’s a red coat in her room.

Aria (Lucy Hale) is avoiding Ezra like the plague. She’s trying to move on with her life and her relationship with Jake. When Emily learns that Ezra is losing Malcolm, she encourages Aria to talk to Ezra, but Aria disregards her friend’s advice.

Jake sees Ezra at the hoedown and confronts him about Aria. He asks Ezra to give him and Aria space. He encourages Ezra to move on.

Also happening at the hoedown, the stalker guy named Travis asks Hanna to dance. He put an envelope stuffed full of hundred dollar bills in her locker and says he knows her mom is innocent.

Travis confesses he was at the lake the night Wilden died because Wilden had asked for his help with his car. Travis saw Ashley there talking to Wilden and also saw her leave. He heard shots after Ashley was gone. After the crime, he panicked and left his truck at the lake. Later, it was parked back in his garage with a wad of cash on the seat. Whoever delivered the truck thought it would keep Travis quiet. Travis says he waited to talk because there’s bad blood between Travis’s dad and Wilden. If Travis says anything to the police, his family could be implicated.

Hanna tells Caleb about Travis. Caleb doesn’t trust him, but Hanna says she might have to. 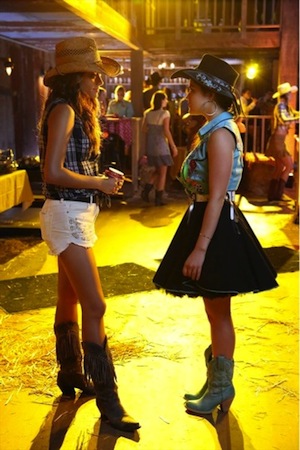 Elsewhere at the dance, Toby is still looking at the address with the picture of Palmer’s car. He’s hoping the notes from Palmer’s sessions with his mother are in the car. Spencer tells Toby the girls know about his texts from A. Toby says she chose them over him and storms from the barn.

Spencer thinks A is setting Toby up and sends Caleb to find him.

Caleb finds Toby and tells him he needs a reality check. A police car arrives and the boys run.

Then Emily sees someone in a red coat at the party. Emily and Spencer race outside. They are just about to steal a guy’s hay truck and race after red coat when someone moves underneath the hay. Emily gets out of the car and stabs at the cab with a hoe she finds against the barn. Luckily, whoever was under the hay escaped before Emily could murder them. (Why would she stab at the hay unless she knew for a fact it was someone dangerous under there?) All that’s left behind is a red coat.

Without any other leads to follow, Spencer and Emily head back inside to the dance where Emily shares an intimate dance with Paige.

Emily also finally spills the details about Ezra to Aria because Aria refuses to talk to him.

Aria immediately apologizes to Ezra for not being there for him. He says he shouldn’t be invading her life with his problems and leaves.

Later that night, Aria goes to Ezra’s apartment. She stays with him, and he fills her in on everything that’s been happening. Jake doesn’t know she’s there.

CeCe is outside the door in a black sweater listening in on their conversation.

Hanna approaches Travis after the dance. She gives him back the money and encourages him to do the right thing.

Travis goes to Tanner and tells the police everything.