It took Ali Larter a long time to lose her baby weight, and she has a new respect for women who have had babies. 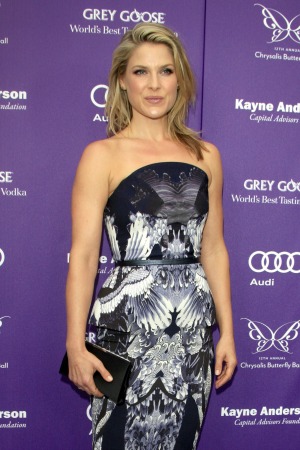 Model-turned-actress Ali Larter has always had to watch her figure as part of her career, and struggled with the weight after giving birth to her son.

Larter told Health magazine she gained 45 pounds during her pregnancy in 2010, and the weight didn’t just melt off like she expected it might.

“For women who gain 25 pounds, that’s probably true,” she said. “I gained 45 pounds. Mine came off at about five months, after working out a lot and doing a food delivery service.”

Like many other celeb moms who have lost the weight, Larter learned a lot in the process of losing the baby weight. She is coming out with a cookbook, Kitchen Revelry, in September. It gave the Heroes actress a whole new perspective on what she considers a hot body.

“It’s hard to impress me with a body that hasn’t had a baby,” Larter joked to the magazine. “Have a baby and then let’s talk.”

Larter doesn’t limit herself when eating, she just knows now how best to balance out her guilty pleasures. She said, “like most women, I can’t eat half a brownie.”

The actress has found many different ways to enjoy life, and her most recent obsession has been inviting friends over to share her joy.

“I can’t go a month without throwing a dinner party,” she said. “For me, entertaining has become a metaphor for life. If you mess up, laugh at it and order pizza. What’s important is putting yourself out there.”

Although having a baby has changed the way Larter thinks about food and fitness, it hasn’t changed her style. But the 37-year-old mom said that’s really only because she never put too much time into her clothes to begin with.

Larter is back at work, and will next star alongside Josh Duhamel and Emmy Rossum in You’re Not You.