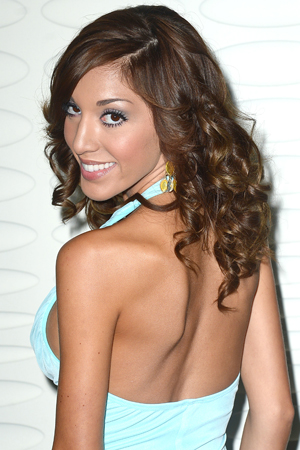 Farrah Abraham earned “six figures” — plus a fat bonus check — for having sex on camera, but that doesn’t mean she actually wants to spend it.

No, she wants to spend your money. Specifically, the former Teen Mom star wants you to send her things off her Amazon wishlist. “I love my #GIFTS,“ she tweeted on Sunday. “Thank you Fans xo.“

Farrah Abraham gets kicked out of rehab >>

The list is full of goodies for Abraham, ranging from a dress for $49.50 to a three-column bookcase clocking in at $1,489.

“I’m a reader 🙂 Thank you,” she wrote of the bookcase. She also wants a few Halloween outfits to choose from this year, like a sexy French maid uniform and a “sexy superhero” costume.

There are also a few token items thrown in for daughter Sophia, including a Disney’s Little Mermaid bath doll and some clothes.

It all seem really outlandish considering that Abraham is a millionaire, but it’s a common thing among adult film stars. It seems like she learned a trick out of that playbook when she created her sex tape, though she’s quick to say she’s not one.

“You have been a single mother for four years, off and on, dating loser-a** boys who always try and sell information, lie to you, manipulate you. You have just realized you are an awesome person and you deserve someone. Now that you’re 21, you’ve pretty much been crying every night because you are single and you’re alone. So, you make your own video, celebrate your awesome body [and] get your own sexy shots,” she explained of why she made the tape.

“So, the person you did this with has the urge to yell it out, when he should be professional and is not. But you have companies that are interested, so why not sell it. And that’s what I did.”

Before you cry about the injustice of the world, take comfort in one thing: No one has purchased anything off her wish list… yet.