With the release of the cover art and a snippet of his new song “Breakfast Can Wait,” Prince proves that even at 55, he hasn’t lost his sense of humor. 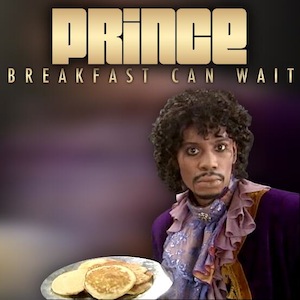 Proving that he is a good sport, almost 10 years after a sketch on Comedy Central’s Chappelle’s Show poked fun at The Purple One, Prince released the cover art to his latest single, “Breakfast Can Wait.”

If you’re not familiar with this image, let me take you back.

On a 2004 episode of Chappelle’s Show, cast member Charlie Murphy (aka Eddie’s older brother) told the allegedly true story about a surreal night when he was out with Eddie at a club and Prince walked in.

And the night just gets stranger from there.

If you’ve never seen it, or would like to watch it again (and again and again like I have been doing), here’s the “Charlie Murphy’s True Hollywood Stories: Prince” sketch. While most of the NSFW language has been bleeped, you still may want to watch this with headphones due to the language.

It’s such a famous and loved sketch that pop culture bloggers and websites have been going wild ever sense Prince tweeted this:

Along with the album art, Prince also released a 45-second snippet of the sexy new track which is available now at 3rdeyegirl.com

Take a listen to Prince’s new track “Breakfast Can Wait” and let us know what you think in the comments below.