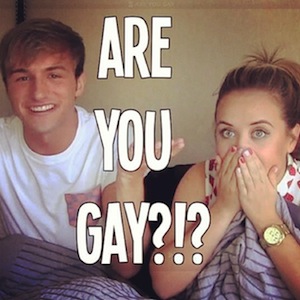 Cruikshank is a 19-year-old YouTube star who created the character Fred Figglehorn when he was just 12 years old and amassed millions of YouTube subscribers with his internet series.

The success of Fred Figglehorn took Lucas all the way from YouTube to a very a popular and lucrative Nickelodeon franchise in 2010 which included three movies and guest roles on other Nickelodeon series such as iCarly, and even an appearance at the 2010 Kids’ Choice Awards.

Just a few hours ago, Cruikshank posted a new YouTube video on his channel in which he comes out. The video, “Are You Gay?!?” shows Cruikshank and Disney actress Jennifer Veal answering fan questions.

Lucas Cruikshank told his fans that his family and friends have known he was gay for about three years but he “just hasn’t felt the need to announce it on the internet.” Jenny chimes in that she’s pretty much always known that Lucas was gay — according to her Lucas’ first impression was a dead giveaway.

The Fred creator and star instantly received an outpouring of support and encouragement for his announcement, although Lucas doesn’t seem to be overwhelmed by his decision to come out as gay. 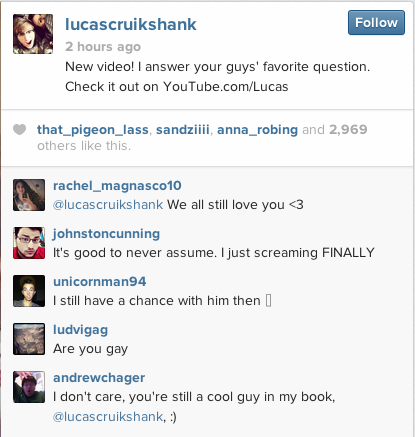 Check out one of Lucas’ most popular videos with over 58 million views: Fred Goes Grocery Shopping feat. Annoying Orange