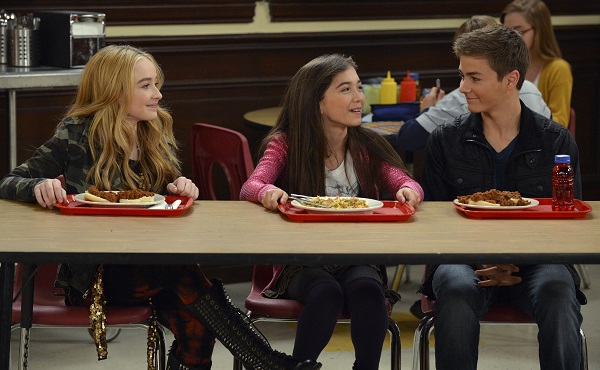 Riley Matthews has a crush and we know his name!

It’s been several months since Disney announced it would be making a sequel/spin-off to our favorite ’90s show Boy Meets World. Since the announcement was made, Disney has sporadically released new information to help keep us interested. From naming the girl who will play the well-loved Cory and Topanga’s daughter Riley (Rowan Blanchard) to news that Mr. Feeny would return, Disney has kept us waiting with bated breath for whatever tidbits they would be willing to share next.

The pilot hasn’t aired yet, but Disney already ordered a full season! >>

They let Boy Meets World fans in on some exciting new news this week. Just like Cory almost always had one crush or another during his boyhood, so will his daughter Riley, and today we finally saw the boy of her middle-school dreams.

Meet Tristan Friar, Riley Matthews’ classmate and first crush. The adorable Peyton Meyer plays Tristan and we can see why Riley would have a crush on him. Peyton spends his time between Los Angeles and Las Vegas and, despite being so young, is clearly no stranger to show business. He even has a recurring guest role on Disney’s Dog with a Blog.

Even more details on the upcoming Girl Meets World >>

Disney also introduced us to 5-year-old August Maturo, who will play Riley’s little brother, Louis. Maturo previously worked on How I Met Your Mother and Weeds, but what he really has going for him is his mop of curly brown hair. He absolutely looks like he could belong to Cory (Ben Savage) and Topanga (Danielle Fishel).

Both boys have siblings, so they’ll fit right in to the Girl Meets World coming-of-age comedy. Maturo will know exactly how to be a little brother and Meyer ought to be able to sympathize well with Riley as she faces the woes of being a big sister.

Girl Meets World doesn’t premiere until 2014 and we’re always dying for more info. We may never make it!

To keep up with everything GMW, sign up for our entertainment newsletter >>