Taylor Swift gives Ed Sheeran some jam, and pokes fun at Kanye West in the process. 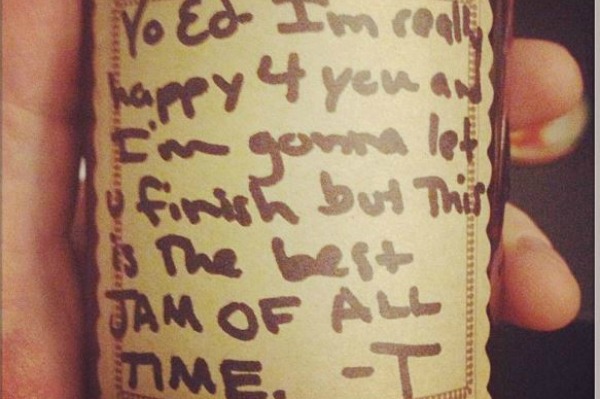 Taylor Swift certainly isn’t afraid to poke fun at herself — and at Kanye West while she’s at it. Yahoo reports that her friend Ed Sheeran, who has been rocking the stage with Swift on her latest tour, posted a photo on Instagram that has many fans giggling.

Taylor Swift regrets most of her ex-boyfriends >>

The photo is of a large jar of jam and Sheeran captioned it with the following comment: “Taylor made me some jam. Amazing.”

On the label, Swift wrote, “Yo Ed, I’m really happy 4 you and I’m gonna let you finish but this is the best JAM OF ALL TIME. -T.”

From the caption and the label, fans are led to believe two things: 1) that Swift makes homemade jam, and that 2) she still hasn’t let go of a little incident from 2009.

The label on the jam obviously refers to the time when Kanye West jumped onstage and interrupted Swift while she was in the middle of giving her acceptance speech for Best Female Video during the 2009 MTV Video Music Awards.

Swift took the interruption like a champ, but it doesn’t look like she’ll ever forget it, either. In addition to the latest joke, she also gave West some gentle ribbing when she found out that she was nominated for Best Female Video again for the 2013 MTV Video Music Awards. After the announcement was made, Swift posted a little message to her fans (and perhaps to a certain rapper as well) on Twitter, promising fans that if she got the award again, she’d be sure to keep a better grip on the microphone this time.