CSI fans: One of your old favorites is coming back! (But only for one episode.) 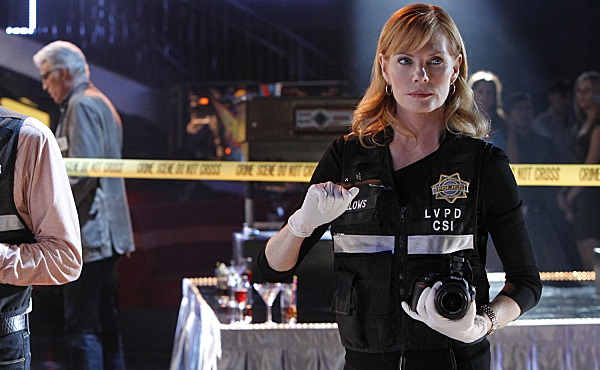 Marg Helgenberger was the reigning queen of CSI for 12 amazing seasons. She and her character Catherine Willows were much loved by CSI fans. When she departed, many viewers worried that the show would never be the same. If they’re still watching the eerie crime drama, they’ll be happy to know Helgenberger is returning… for just one episode.

CSI rolls in guests all the time — among them, a Days alum >>

It’s all hands on deck for CSI‘s 300th episode. All the crime scene investigators will be on tap (except maybe William Peterson) as they try to solve a cold case that has plagued them for 14 long years. The case? There’s a murder inside the home of a reclusive casino mogul. What makes the investigation even more sticky is that the mogul had been their prime suspect in an unsolved case from more than a decade earlier. As they investigate the new murder, it bears a striking resemblance to the previous one. Will looking back at their own timelines and the events surrounding each of their lives back in 2000 help them solve both cases? Helgenberger will rejoin her friends at CSI to help them find out.

When Bieber dropped by CSI, Helgenberger said he was a brat >>

The beloved ginger isn’t returning for good, though. She has a new day job to keep her busy.

Helgenberger is set to star in CBS’ Intelligence, which will premiere mid-season. Intelligence also stars Josh Holloway from Lost. The show centers around Holloway’s character, a first-of-his-kind intelligence operative with a special microchip implanted in his brain. But does he control the chip or does the chip (and the agency) control him?

If Intelligence doesn’t strike your fancy (or if you’re just giddy for Willows’ return), CSI‘s Season 14 premieres on CBS on Sept. 25 and the special 300th episode starring Helgenberger airs Oct. 23 at 10/9c.

For the latest scoop on TV, sign up for our newsletter >>