Money. Drugs. Murder. The shocking reality behind the Versace label is brought to life as Lifetime Television adapts the bestseller House of Versace. 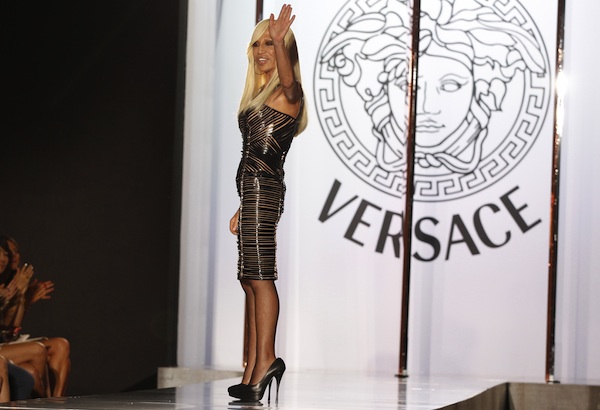 Raquel Welch heads to Lifetime Television this October and she’s dripping in Versace. Welch is set to star opposite Gina Gershon in Lifetime’s latest original movie, House of Versace.

PHOTOS: Inside the Versace for H&M launch party >>

The film will detail the story of Donatella Versace as she struggles to take control of the iconic Milan fashion house in the months following her brother’s 1997 murder. House of Versace is largely based on the best-selling autobiography of the Versace siblings by reporter Deborah Ball.

Ball’s book, House of Versace: The Untold Story of Genius, Murder, and Survival, received critical acclaim when it was published back in 2010.

Raquel Welch will star as Donatella’s aunt, Lucia, while Gina Gershon will portray the infamously blonde and tanned Donatella. Gershon is set to weave the audience through Donatella’s grief, drug use and financial chaos as she nearly drives the Versace label into the ground in the months following Gianni’s untimely death.

As Aunt Lucia, Welch provides a strong foundation for Gershon’s character to lean on and recover.

Is House of Versace another Lifetime biography bust? >>

Deborah Ball is the longtime Milan correspondent for the Wall Street Journal and still writes for the paper. Ball wrote House of Versace in 2010. In an interview for the Boston Globe for the book’s release, Ball explained Donatella’s struggle as the new visionary for Versace.

“Her personal and professional behavior were out of control. The company was spinning out of control. She hit bottom in 2004 and was doing coke every day. There was a family intervention and she’s clean and sober now. She’s very open about it.”

The Hollywood Reporter was the first to hear about Lifetime’s decision to adapt Ball’s book, which featured hundreds of firsthand interviews with Versace family members, models and magazine editors, including Anna Wintour, Editor-in-Chief of American Vogue.

Ball commented to the paper that despite the Versace’s ubiquitous name, the brand remains a shell of its former self as a direct result of Gianni’s murder. “It’s a niche brand with an outsized image. [Versace] never fully recovered from Gianni’s death. It will stay a niche company.”