The anthem of the summer, Robin Thicke’s “Blurred Lines,” is up for Video of the Year at the 2013 MTV Video Music Awards. We take a look at what makes this infectious hit so worthy of taking home the Moonman. 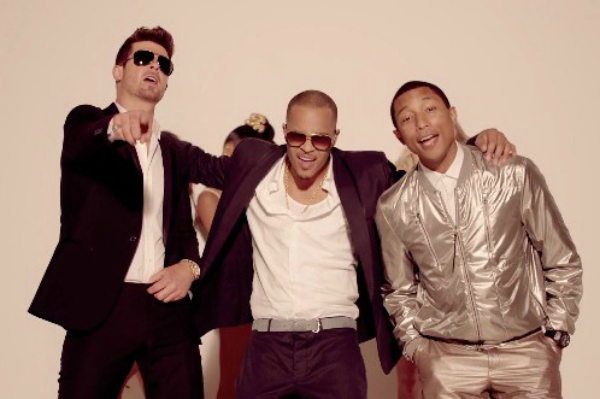 Here’s the thing… when you’ve got Robin Thicke, T.I. and Pharrell all working it for four-and-a-half minutes, you just can’t expect anything less than music video magic. And that’s exactly what the boys deliver in the offbeat, sexually suggestive, hashtag-laden “Blurred Lines.”

Part of what makes the video so frickin’ hilarious is the sheer randomness of it all. We’re pretty sure one model exists solely to parade kooky objects around. Case in point: 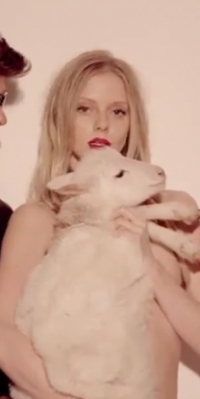 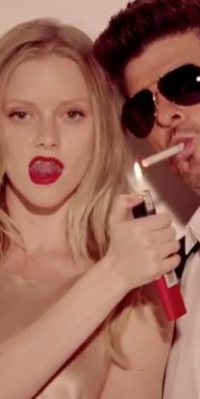 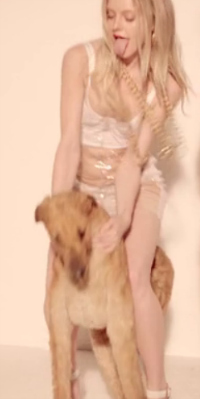 So, let’s see… this blond model goes from cuddling a baby goat (or lamb? We can’t be sure!) to lighting Robin’s ciggy with an enormous novelty lighter to riding a taxidermied dog. We’re sure there’s some underlying sexual innuendo or secret of Robin’s psyche being unveiled here, but we don’t know what it is — and we’re not sure we’d want to anyway! Of course, Blondie isn’t the only one whose weird is showing in this super-strange yet strangely likable video.

This chick got tasked with the ol’ toy car riding down the curve of the back trick, plus…

These crazy gigantic Gaga-esque shoes! Wonder how much those bad boys weigh?

Aside from the cornucopia of quirkiness, the video is all about some hashtags. Giant red letters (and pound signs, natch!) flash across the screen throughout much of the video, mainly spelling out #Thicke and #BlurredLines. Here’s a classic example: 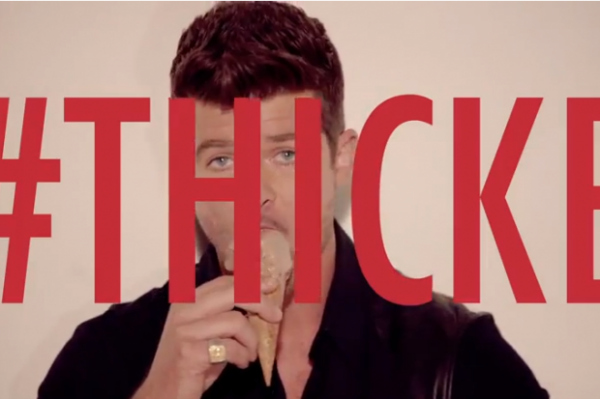 Between his piercing stare and seductive ice cream-eating, Robin somehow manages to emit the equivalent of a sexual solar flare that sears right through those giant red letters — which leads us to the video’s next hallmark and, quite possibly, one of the biggest contributors to its popularity.

Aside from the obvious half-naked women dancing around, legitimately naked women make their fair share of cameos as well. Here, T.I. strokes one’s hair. And, well, then there’s this… 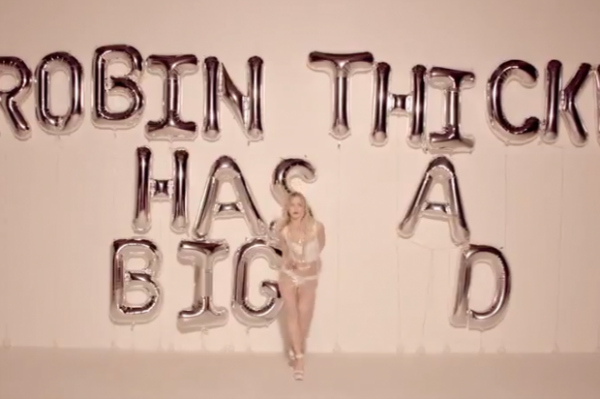 OK, so that’s not so much innuendo. Sexually suggestive imagery aside, arguably the most contagious aspect of the video is all the dancing!

Yes, that’s a naked chick — but she pales in comparison to T.I. “catching the spirit.” Or to T.I.’s turn on the track, which “Blurred Lines” just wouldn’t be the same without.

So, there you have it. We’re betting “Blurred Lines” takes home the Moonman for Best Video of the Year because it is four minutes of pure, unapologetically sexy fun. And that, friends, never gets old.