With over 400 million views on YouTube, it’s no wonder Macklemore & Ryan Lewis’ hit “Thrift Shop” is up for Video of the Year at the 2013 MTV Video Music Awards. Here are a few of our favorite moments in the viral vid.

From the opening sequence when Macklemore, Ryan Lewis and their patchwork band of thrifters immobilizes — riding everything from mountain bikes to laundry bins — you get the distinct sense that this isn’t your typical flashy rap video.

10 Things you don’t know about Macklemore >>

And, as we know, Macklemore isn’t your typical flashy rapper. The self-proclaimed thrift shop fanatic eschews the stereotypical hip-hop values of “the expense or the commoditization” of items. 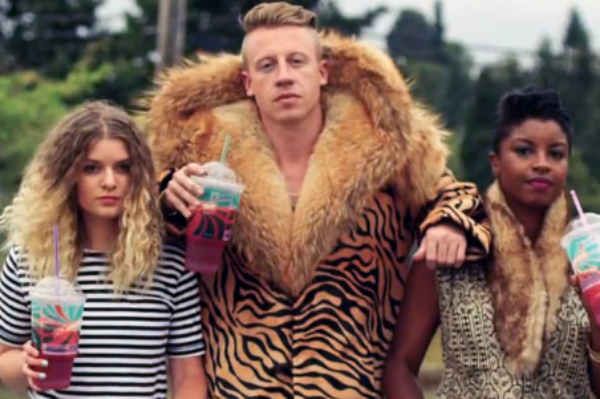 When he rolls up in the video sipping on a slushie, wearing a tiger-print coat and being steered by two refreshingly normal-looking ladies, it’s kind of a can’t-help-but-smile moment. Or laugh, ’cause that is one funky coat.

But, hey, it isn’t the only big-a**, secondhand coat he scores throughout the course of the song. This one seems pretty nice… 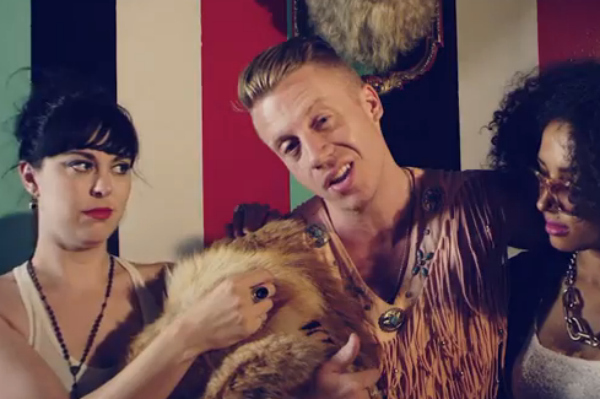 But, uh, he admits she should have washed it before wearing it because it “smells like R. Kelly’s sheets.” Ewww! So why’d he buy the odiferous outerwear? “Sh**, it was 99 cents!” And there’s the core of both the song’s purpose and appeal: Macklemore is a fearless thrift shopper who isn’t afraid to make fun of his secondhand style.

Or a killer pair of onesie pajamas with footies (Batman, no less!)…

Macklemore makes being broke look cool — which is why we’re guessing the video particularly resonates with the college crowd. Who cares if you’ve only got $20 in your pocket? Macklemore turns $20 into priceless treasures. He makes only being able to afford grandpa clothes totally legit.

Best Videos with a Social Message: What issues are addressed? >>

But, as much as we love (and we really do) Macklemore in this video, we don’t think the video would have been nearly as effective without this scene-stealer:

Who is she? We have no idea. We couldn’t actually find any credible source pointing to her identity. Suffice it to say though, she’s — as the lyrics go — pretty “f*****’ awesome.” And, on the subject of scene-snatchers, have you heard the story of Michael Wansley?

You may be asking yourself who the h*** Michael Wansley is, since you likely know him as Wanz — the deep-voiced collar-popper who appears in “Thrift Shop” to sing the signature “I look incredible” line. He takes the video to the next level, which is funny considering the 51-year-old was sitting behind a desk at Microsoft before Macklemore called him.

And, as if you needed any other evidence “Thrift Shop” deserves to be in the running for the MTV Video of the Year Moonman, just remember…

The DeLorean makes a cameo.