The Switched at Birth Season 2 finale left us (mostly) satisfied. Find out which characters’ stories we liked, and which ones left us unsatisfied. 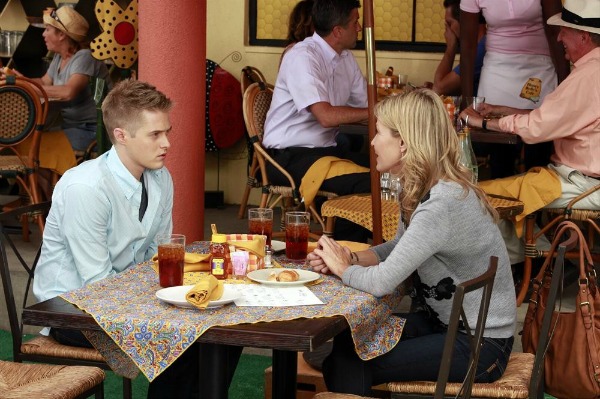 Well, it’s that time again. With the flick of a few switches, the lights of the Maui carnival went dark and signaled the end of the Season 2 finale of Switched at Birth, appropriately titled, “Departure of Summer.” It has been a season full of ups and downs and overall, we at SheKnows felt that the final episode tied up a lot of loose ends. But while it left us mostly satisfied, there were still a few points that we might like to see changed in Season 3.

As Daphne said in her voice-over at the end of the episode, a lot of the characters ended up doing the wrong things for the right reasons. Some of those right reasons outweighed the wrong, while some did not.

Toby and Nikki do things their own way

OK, we know that we’ve been hard on Toby and Nikki through much of this season, but that was just because we wanted to see them happy. Toby hasn’t seemed happy most of the season and neither has Nikki, so it seemed like the two of them getting married wasn’t really going to change that. But in this episode it felt like once Toby and Nikki got wind that their parents were really opposed to the wedding, they finally took a long, hard look at what they wanted. In the end, they looked so happy when they kissed on the steps of the courthouse and it was as if they finally took control of their own futures.

Switched at Birth Season 2 Episode 19 recap: There are always consequences >>

Daphne and Jace face the music

We haven’t exactly been easy on Jace and Daphne this season either, mostly because it seemed like both of them were getting away with some pretty bad stuff. For a while there it looked like Daphne was going to face it all on her own, then it looked like her dad was going to bail her out — neither option sounded very fair. But then, in the end, Jace and Daphne told the truth about everything and took out Coto in the way they probably should have in the first place. We only hope their decision to be honest hasn’t ruined their lives forever.

Switched at Birth Season 2 Episode 18 recap: Daphne and Jace are on a roll >>

Angelo gives Abby the best life he can

When Angelo was seen struggling to take care of Abby, we hoped that didn’t mean he was simply going to give up on her. We thought he needed to be her dad, but maybe the best way he can be a good dad is to give her the life she deserves. When he decided to give her back to her adoptive fathers, but kept his own visitation rights, we won’t deny there were a few tears being shed. Angelo made the toughest, yet best, decision for his baby girl and we admire him for it.

Switched at Birth Season 2 Episode 17 recap: Since when is blackmail OK? >>

Bay and Ty… or Bay and Emmett?

The Ty and Bay situation was one that left us perhaps not as satisfied as the rest of the stories. While it’s understandable why Ty would want to keep Bay’s heart from being broken should he die in war, he’s causing her a whole lot of heartbreak right now. When Ty and Bay get along, they are a great couple, but sometimes they can get a little bit annoying. When Emmett came back into the picture, suddenly all the memories of their good times together came back and it seemed like a positive thing if they got back together again. But Bay getting back together with Emmett because she thinks Ty cheated on her is an awful option. It’s a “damned if you do, damned if you don’t” kind of situation, no matter which way you look at it.

What did you think of the Switched at Birth Season 2 finale? Did it leave you satisfied or unsatisfied?