By now, everyone knows VMAs-nominee Macklemore, thanks to the catchy single “Thrift Shop.” But do you really know the man behind the mic? Here are 10 fun facts (like his real name!) you might just be surprised to learn. 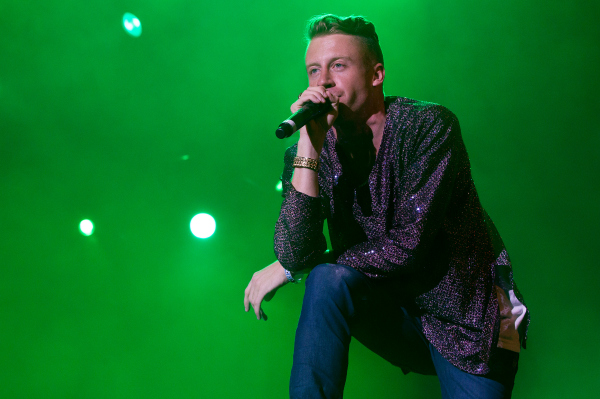 His real name is Ben Haggerty

In an interview with Complex magazine, the rapper divulges the inspiration behind his stage name, explaining, “I came out to Pratt Art School when I was a junior for the summer. We were given an [assignment] at graphics art class at my high school in Seattle, and I was given this superhero in plastic wrapping. We had to give him a name. I named him Professor Macklemore.”

Macklemore popped the question to his girlfriend of seven years, Tricia Davis, on Jan. 21. But, hey, she has stuck by her beau through thick and thin. “When you fall in love with a drug addict, totally can’t-afford-anything guy and your mom is asking you what the heck you’re doing, I mean, there is a reason why you’re…” she trails off, before explaining, “I knew from the first time I saw him perform, I was like, ‘He has that potential.'”

Macklemore’s commitment to his sobriety wasn’t always as unwavering as it is now. In 2008, he spent time in rehab for both drug addiction and alcoholism, but relapsed in December 2011. He addresses the relapse — and his subsequent disappointment in himself — in his song “Starting Over.”

The rapper’s got major love for his hometown team, the Seattle Mariners. After expressing his respect for the sport through “My Oh My” — a tribute to late sportscaster Dave Niehaus — Macklemore and Ryan Lewis performed at Opening Day 2011 for the first Mariners game since Niehaus’ passing. For their part in the important day, the two received special patches given only to them and the athletes who played in the game.

You know that man in the “Thrift Shop” video with the impressively deep pipes? Of course you do. His stage name is Wanz, but the 51-year-old breakout singer’s real name is Michael Wansley and, prior to getting a call from Macklemore about a collaboration, he worked a desk job at Microsoft. Furthermore, the fellas made the dreams of 23-year-old gospel singer Ray Dalton come to life with the chart-topping single, “Can’t Hold Us,” after winning the approval of Dalton’s grandmother to get him on the track.

He hopes you don’t dig up his first album

Macklemore may be racking up major airtime with his current album, but it isn’t actually his first. In 2000, he released Open Your Eyes… but he wishes you didn’t know that. “Damn! I never wanted that to make its way to the Internet,” he jokes in an interview with Esquire. “It was only a matter of time. I actually haven’t heard it in years. I was a kid in high school that loved music.”

POLL: Who will win the VMAs Video of the Year? >>

Lewis is listed as Macklemore’s producer, but the rapper asserts that he is much more than that. “Ryan is one of my best friends in this world,” he says. He also notes that he trusts Lewis, whom he spends more time with “than anyone else in my life” and is “extremely blessed because of it.”

He found God through… ‘shrooms

Yep, you read that right. Macklemore’s lyrics often tackle church, religion and the like, but the rapper says he is far more spiritual than religious. “I’ve been a spiritual person since I was about 15, 16, when I was first introduced to Psilocybin [mushrooms],” he elaborates. “That really opened me up to thinking about the universe in a different way, and coming to significant realizations about my connection to something greater than me.”

He drops some serious dough on shoes

Don’t worry — “Thrift Shop” is, essentially, true to its word… Macklemore is an avid thrifter. However, that’s not to say the rapper won’t splurge from time to time. “My fans are going to hate me now,” he jokes about a pair of black and gold loafers he recently paid $600 for. “But I was like, ‘These are some shoes I’m going to have to buy.'”

Best Videos with a Social Message: What issues are addressed? >>

He wasn’t exactly a model citizen in his youth

Macklemore seems like such an easygoing, laid-back dude, but he admits he got fired from every job he had in high school because of “an attitude problem.” He also didn’t get accepted into any colleges because, well, “it’s a lot harder to cheat on the SATs… looking over your friend’s shoulder doesn’t exactly work the same.” For the record, he doesn’t recommend anybody follow in those footsteps!