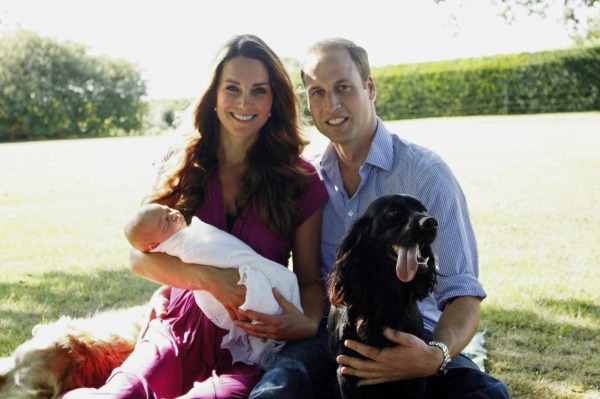 And baby makes three… or five if you count the dogs. Kensington Palace has released the first official baby pictures of Prince George, and rather than the stuffy family portraits of the past, Prince William and Kate Middleton’s shot could be of any happy family, dogs included.

The photo shows three smiling faces (that would be Will, Kate and their dog Lupo) along with two sleepyheads: baby George and Tilly, the Middletons’ family dog. Taken on the grounds of Kate’s family home in Bucklebury, Berkshire, where the family has been enjoying its first weeks together after the birth of the royal baby, the photo was snapped by Kate’s father Michael Middleton.

Kate is absolutely glowing in a purple, short-sleeved dress by Seraphine Maternity and her hair perfectly coiffed as usual, while Prince George appears to be wrapped in the same G.H. Hurt white wool christening blanket wrapped around him when he made his introduction to the world press outside of the hospital — a similar blanket to ones donned by Princes William and Harry, several of their cousins and the previous generation of royals, including Prince Charles.

Earlier today, CNN broadcast Prince William’s first formal interview since becoming a dad, and he talked about how proud he and Kate were to show off their bundle of joy before leaving the hospital.

“I think more shock was the feeling I felt, but I was on such a high anyway, and so was Catherine, about George that really we were happy to show him off to whoever wanted to see him,” he said.

“As any new parent knows, you’re only too happy to show off your new child and, you know, proclaim that he is the best looking or the best everything. It’s nice that people want to see George — I’m just glad he wasn’t screaming his head off the whole way through!”

The casual family snapshot signals the more modern approach William may one day take to the monarchy, as does the fact that he chose to drive his new family home from the hospital himself rather than rely upon a driver.

“I am as independent as I want to be, same as Catherine and Harry,” Wills explained. “We’ve all grown up differently to other generations and I very much feel if that I can do it myself, I want to do it myself.”

“There are times where you can’t do it yourself and the system takes over, or it’s appropriate to do things differently. But I think driving your son and your wife away from hospital was really important to me.”

Stars tweet their excitement ahead of the royal baby birth
The royal baby already has its own title!
Royal baby at risk: Real danger awaits Will and Kate