If the dome causes you to have seizure, it apparently just means it likes you. Norrie, Joe and Angie are all in the club, but they discover they’re missing one more member. Who could it be? 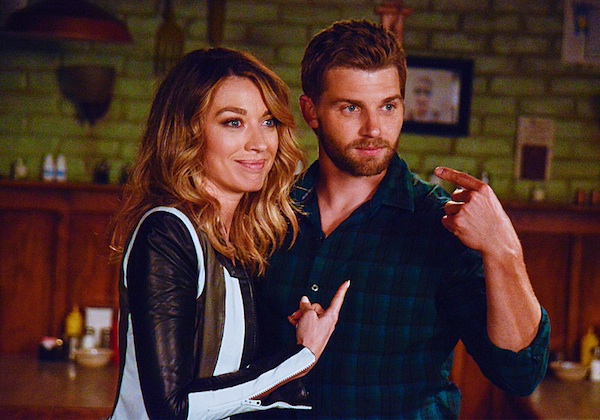 The kids aren’t the only ones freaking out in Under the Dome. Apparently, there’s a new drug in town besides creepy dome energy. It’s called Rapture, and it will make you shake and hear voices almost as if you were as cool as Norrie and Joe talking about pink stars.

At the start of the episode, Julia takes Barbie (Mike Vogel) to the mini dome site, but the mini dome is gone. There is just a crater hole where it once sat.

Back inside the town, a man is hearing voices from the dome. He’s holed himself up inside a house, causing quite the disturbance, and Linda and Barbie arrive to take care of him. Linda recognizes the man. He’s a druggie named Larry. The man says Lester was the one who gave him some sort of drug that has him going crazy. The man calls the drug Rapture.

Angie wants the deed for Briar Rose free and clear from Big Jim.

After Big Jim leaves, Junior shows up and Angie refuses him service.

Angie wakes up in the back of Junior’s car. She freaks out, but he is just taking her home.

Norrie sees Angie’s tattoo and points it out to Joe as a possible clue to the dome’s line about, “The monarch will be crowned.” Joe says monarch butterflies are orange, but Angie’s tattoo is blue and yellow.

Norrie suggests using their dog Truman to track the mini dome because he sensed it before. He doesn’t find anything when they take him out to the forest, though.

Angie asks Junior about his theory she’s sick. He shows her to his house, and his mom’s art studio. He tells Angie a couple of months before his mom died she had a dream about Junior. In her dream, Junior was on a hill looking up at pink stars falling.

Junior thinks maybe his mother knew something about the dome or the pink stars. Junior says he isn’t crazy and neither was his mother. He thinks he’s a part of some bigger plan because he’s in the painting. Junior thinks it’s great because it means he and Angie are in this together. He’s still in love with her, of course.

A drug with a little kick

A woman named Maxine shows up at Big Jim’s house, and he isn’t happy to see her.

The day the dome fell she was coming to see him, but then she got trapped. She says she’s been staying at a house trying to wait out the dome, but when that didn’t happen, she’s tried to make the best out of a bad situation. She says they need to get to work. They manufactured the new drug Rapture together.

Barbie and Linda go to the funeral home. They find Lester’s supplies and a recipe to make Rapture. The drug has liquid propane in it. 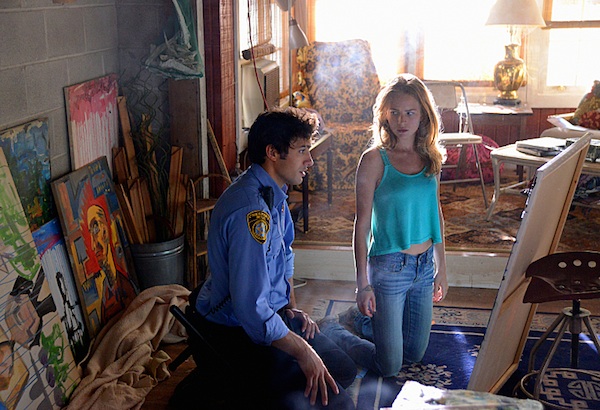 Down with the guns

Big Jim suggests Linda and Barbie collect all the arms. They agree to propose the idea as voluntary and temporary over the radio. Anyone who participates will get extra food and propane.

Maxine hides her gun in her glove compartment.

Most of the townsfolk participate and hand over their guns. A man named Ted really likes his guns and won’t give them up. Big Jim plans to go to Ted’s house because he’s gone crazy. Barbie offers to play backup.

Ted is in his bedroom and has all his guns around him. Big Jim sits down with him and asks what’s going on. Ted says the dome has already taken enough from him, and he isn’t giving up one more thing. Ted is holding a grenade. Barbie has his gun pointed at the two of them as Big Jim tries to talk him down. Ted pushes Big Jim away and pulls the pin on the grenade. Big Jim just barely stops it and takes Ted to the clinic.

Linda goes and investigates the storage unit. She shoots open the lock and finds all the stockpiles of propane inside.

After getting into Duke’s office, she watches the security footage from the storage unit. She sees Maxine meet with Duke and knows he was into something.

Maxine shows up at the station and talks to Big Jim, and then Maxine kisses Barbie full on the mouth, much to Big Jim’s surprise.

Maxine’s planning on distributing booze, drugs and gambling to the townsfolk to pass the time. Big Jim and Barbie have both been working for Maxine without knowing it, and she wants them to continue working for her. She says she has an insurance policy in place. If anything happens to her, she has a way to make sure their secrets still come out.

Barbie doesn’t want to be involved with Big Jim and Maxine. Maxine knows Barbie killed Paul. She was the one he called after he got rid of the body. She also knows he’s sleeping with Julia. Maxine’s been watching all of them.

That night, Julia tells Barbie about the mini dome. Barbie’s mind is somewhere else, but he insists everything is fine. He doesn’t tell her about Maxine.

Who is the fourth hand?

When Norrie and Joe get home, Truman starts barking at the barn. They check it out and find the mini dome inside.

Angie finds Joe and Norrie in the barn with the mini dome. She says it’s kind of cool. Angie mentions Joe left the house last night and surmises he’s the one who brought the dome there, but Joe doesn’t remember it. He must have been sleep walking.

Norrie thinks the dome is only for the three of them to know about. She says they shouldn’t tell Julia its new location. Angie touches the dome, and it glows blue. Joe and Norrie also put their hands on it. She says it’s like they’re locks and their hands are the keys. Another silhouette of a hand glows on the other side of the dome. The kids now have their mission to find the fourth hand.

Junior sees the cellar door open outside his house and goes inside. Big Jim is down there with the stockpile of weapons, organizing all of them. Including the grenade.