HBO’s Girls has released its first teaser for Season 3. Here’s what we’ve learned from the 30-second clip! 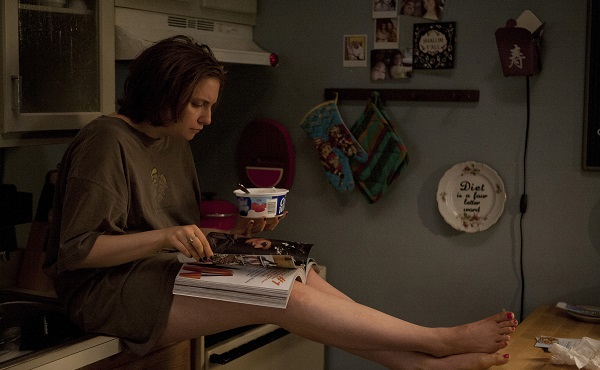 HBO has released the first look at Girls’ return for Season 3. It’s not much… but it’s something.

The 30-second spot doesn’t even feature a video. Instead, it features a flip-book of sorts made up entirely of shots from a weekend at the beach. It’s not much to go on, obviously. But there are a few things we can learn from the spot.

First, we know the fabulous Andrew Rannells will be back. His role first came across as more of a guest spot and, obviously, Hannah’s ex-boyfriend-turn-gay-best-friend was never meant to be one of “the girls.” However, it looks like he’ll return for at least a while during the third season.

Second, Adam and Hannah are doing OK. One of the shots in the stack of memories is of Adam (Adam Driver) and Hannah (Lena Dunham, the show’s creator) hugging. When Season 2 ended, the on-again, off-again couple were seen at a high(-ish) note. It seems as though Season 3 will bring even more dysfunctional fun between the two for viewers to enjoy.

Third, obviously there will be a trip to the beach! The shots show us all four of the core girls: Hannah, Marnie (Allison Williams), Jessa (Jemima Kirke) and Shosh (Zosia Mamet) hanging out near the ocean. Jessa has a tendency to disappear, so it’s good to know she’ll be around, at least for a while.

Fourth, Marnie and Hannah are friends, again? After four views, we’ve yet to catch a shot of Hannah and Marnie together. Since they are both at the beach, though, we can assume they are at least friendly enough again to have a girls weekend together, right?

Then, again… we could be wrong about all of this and they could just be visiting the beach for a photo shoot. The only thing we know for certain about Season 3 is that Charlie and Marnie won’t be together for long. Christopher Abbott (the cutie who has played Charlie for the first two seasons) left the show earlier this year.

For more TV news, check out the newsletter! >>