Kim Zolciak’s family is expanding with not one, but two babies. The reality star has confirmed that she’s pregnant with twins! 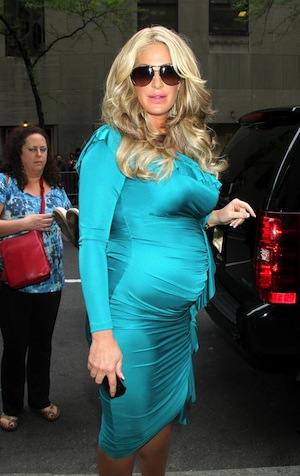 There’s more than one bun in Kim Zolciak‘s oven. The former cast member of Bravo’s The Real Housewives of Atlanta has revealed that she’s expecting twins. Her home with husband Kroy Biermann will be filled with the pitter patter of four little feet.

Zolciak shared her joy with E! News, where she revealed, “I’m having twins and I couldn’t be more excited. I was completely shocked. I had no idea. It was a natural conception, but twins do run in the family, so I guess I shouldn’t have been surprised.”

The wife and mother already has four children. There are Brielle and Ariana from previous relationships, who were recently adopted by Biermann. He’s also the biological father of Kroy Jr. (nicknamed K.J.) and Kash. The twins will have lots of siblings to keep them company.

“I can’t believe I am going to be a mom to six children,” Zolciak exclaimed. “It’s going to be very busy, but it’s a dream come true.” Zolciak hasn’t spilled all the beans regarding her pregnancy. She’s still staying quiet on whether she’s having two boys, two girls or one of each.

On her Bravo series Don’t Be Tardy, she said that she’d love another girl in the house. “Brielle’s going to be 18 soon, Ariana’s six years away from being 18,” she said. “And I’ll be in a house with three boys possibly and Kroy? That’s a life of four-wheelers and football.”

Don’t worry, Kim, you could get your wish. The babies are almost here!