Robin Thicke may have the hottest video of the summer, but it’s a theme that’s been running throughout his entire career. The musician likes sexy videos. 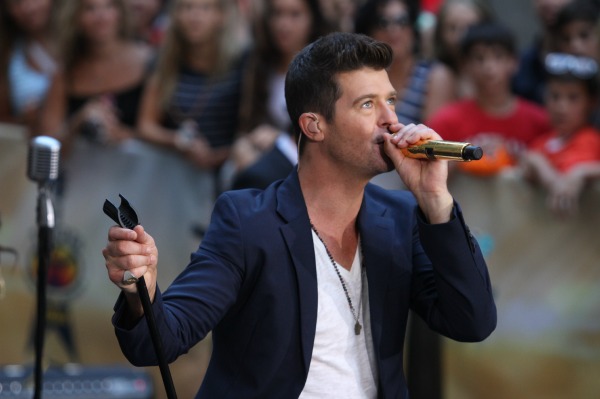 Everyone has been grooving to the 2013 summer anthem “Blurred Lines.” While Robin Thicke‘s sexy and controversial video has had fans talking, this isn’t the first time we’ve seen the hot R&B singer in various stages of undress in his videos. SheKnows takes a look back at some his earlier works to prove that provocative is a long-running theme with the 36-year-old singer.

Here are some of the MTV Video Music Awards nominee’s hottest videos.

A deeper look at the VMAs Video of the Year nominee: “Blurred Lines” >>

This 2009 song was the lead single from Thicke’s fourth studio album. The off-the-charts sexy video features an orgy-filled bedroom with the singer surrounded a trio of gorgeous, scantily clad women. The suggestive lyrics prove that Thicke is the ultimate get-your-groove-on musician of his time. He tells his fans exactly what to do through his music. “Stressed out, uptight, overworked, wound up/Unleash what you got, let’s explore your naughty side.”

Robin Thicke found something that rhymes with “hug me” >>

While this video is a bit tamer than “Sex Therapy”, the Grammy winner gives his fans a glimpse into his relationship with wife Paula Patton. He wrote this song in honor of Patton who supported him when he was going through a difficult time in his career. The 2007 song became a hit, so it makes his wife’s cameo appearance in the song a lovely tribute to her. The couple show off their playful romantic side with a romp in their bedroom. Patton has always been pretty cool with her husband’s sexy videos, but it sure doesn’t hurt to have her star in them from time to time.

The Mission Impossible actress makes another appearance in her hubby’s video with a more dramatic tone. The 2011 song focuses on tumultuous love, but it’s more about making up after a fight. The suave singer is half-dressed for much of this video while Patton struts throughout the video in a blonde wig and skimpy lingerie. There is a bit of bumping and grinding going on to make any viewer realize that these two might have the hottest marriage in Hollywood.