Hulk Hogan’s life story could write itself. The man’s been through it all. That’s why for his upcoming biopic, he needs an actor with right the look and acting chops.

Related story Elsa Pataky & Chris Hemsworth Seem Like the Perfect Couple, But She Swears They’re Not 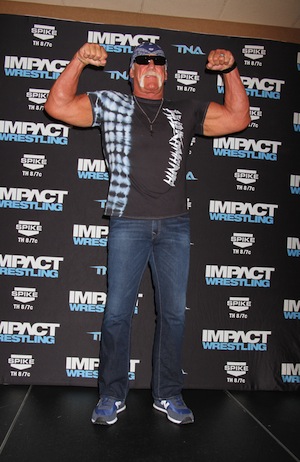 Hulk Hogan, real name Terry Bollea, has led a storied life. He’s arguably the most famous professional wrestler of all time. Now at 60 years old, Hogan’s entertaining the idea of a big-screen biopic.

The wrestler recently spoke to Toronto’s Cape Breton Post where he briefly discussed the developing film. The project is still in the early stages but he confirms writers are attached.

“Two kids that are writers in L.A., hot young writers, they did a four-page treatment and I’m telling you they nailed it,” Hogan said.

“They nailed it like they were living in my shoes — and I gave them the green light to go ahead and write the first pass. But that’s all it is.”

Apparently, these guys know Hogan’s life inside and out. He has faith that they can present his story like no one else.

“First off, they’ve got wrestling in their blood, they were huge Hulk Hogan fans, so they followed not only the smoke and mirrors that you see on TV, but they followed personally what I was going through: the divorce, the car accident, all the drama, the eight back surgeries, the hip replacements, the knee replacements.”

The big question is, who would play Hogan in the movie? Aside from his son Nick, he has eyes for a certain Australian actor. He revealed, “You know who I thought would be good? That guy that did that action movie, Thor [Chris Hemsworth].”

Hemsworth is no stranger to beefing up, so physically he has what it takes. They also share the blond hair and blue eyes. But Hemsworth is a pretty busy man. This fall, he’ll be promoting Thor: The Dark World and is set to reprise the role again for 2015’s The Avengers: Age of Ultron.