Oscar Pistorius has been formally indicted for the murder of Reeva Steenkamp on what would have been the model’s 30th birthday. 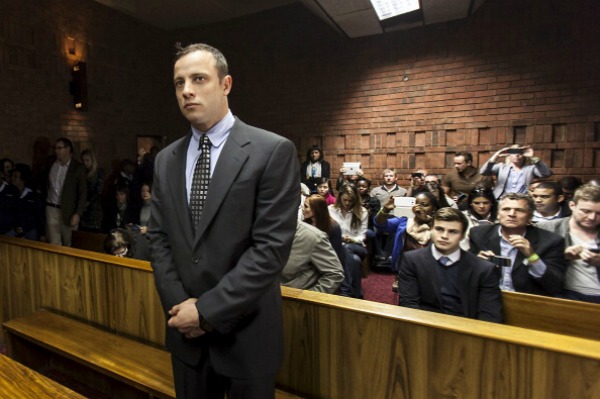 Former Olympian Oscar Pistorius has been indicted for murder in the death of his girlfriend Reeva Steenkamp and will face trial in 2014.

Pistorius, who also faces illegal ammunition charges, appeared in court for the indictment and began weeping before the proceedings began on what would have been Steenkamp’s 30th birthday.

Prosecutors presented plans to call more than 100 witnesses at trial, including Pistorius’ uncle, brother and sister, and neighbors from his gated community where Steenkamp was slain in his bathroom.

Some of those neighbors will reportedly testify that they heard screams both before and after gunshots rang out in the Pistorius home in the early morning hours of Valentine’s Day 2013.

Oscar Pistorius back on track as trial looms >>

“Some of the state witnesses heard a woman scream, followed by moments of silence, then heard gunshots and then more screaming,” the prosecution claims in their 11-page indictment.

Saying the legless athlete known as Blade Runner shot his girlfriend “with the intention to kill a person,” the prosecution told press after the proceedings that although the charges do not specify “premeditated,” that is what they believe.

“When you talk of intentional, it’s premeditated. Intentional. He wanted to do that,” prosecution spokesman Medupe Simasiku said. “In as far as a sound case, let the court decide on that. We believe it will go through in our favor.”

Pistorius maintains that he shot Steenkamp after mistaking her for a burglar. The athlete claims he was not wearing his prosthetic legs when he shot through the bathroom door, hitting Steenkamp three times — a major discrepancy from the version police believe to be true, which is that Pistorius wore his legs while stalking the model through his home in cold blood.

Oscar Pistorius’ trial has been set for March 3, 2014. He is currently free on bail.