Josh Duhamel is excited to be a new daddy, and it’s giving him inspiration to change the world. 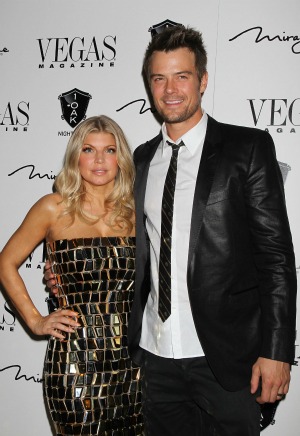 Josh Duhamel and wife Fergie are just days away from having a brand-new baby boy, and they seem to be in good spirits. The dad-to-be opened up about choosing their new baby’s name, and he said another celeb couple stole their chosen name.

“I grew up in North Dakota so we were going to name it North but Kim and Kanye took that,” Duhamel joked to E! News.

The couple isn’t sharing their (actual) baby name just yet, but they seem happy with their choice.

“It’s a fairly traditional name but you don’t hear it very often,” Duhamel said. “It means a lot to both of us and part of it is a family name. We’re not telling anybody because we don’t want to hear it. No matter what you chose, people are going to have their comments.”

Fergie is close to nine months pregnant, and posted a photo of her baby belly on Instagram last week, taken at her baby shower. Duhamel seems to be in awe of his pregnant wife.

“[She’s] unbelievable. The girl is so impressive,” Duhamel said. “You never know how it’s going to go. Some girls have a tougher time, some a little easier. Because it’s a boy, it’s been a really lucky pregnancy in a lot of ways. She’s been happy, in good spirits, she looks great. Even at 8-3/4 months, she’s still in great spirits and looking beautiful. And that just means that she’s going to want another one, which is good for me.”

Fergie, born Stacy Ferguson, legally changed her name to Fergie Duhamel, and the actor said it’s very sweet she would do that.

Duhamel was out promoting a new cause close to him: the Valspar Hands for Habitat campaign. The group helps provides support for victims of natural disasters. Duhamel feels that having a baby has given him a new outlook on life.