Last night’s season finale wrapped up the drama, took us down the road six months and introduced more drama. Now that we’ve had a night to catch our breath, here’s what we want to see in Season 7. 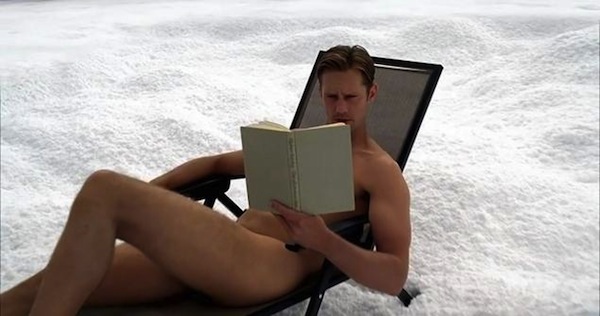 It’s been a wild and rocky road through True Blood‘s Season 6. At times, we discovered that dumbfounded Jason Stackhouse expression plastered on our faces. In other moments, our eyebrows shot up our foreheads almost higher than Maxine Fortenberry’s. Still, we made it through and watched the last moments of Season 6 as vampire/zombies stalked toward Bon Temps. As we rub our hands together maniacally, here are the topics we’ll be waiting for in Season 7:

It wouldn’t be smart of the show to get rid of Eric (Alexander Skarsgård). He’s been the tried-and-true stud throughout the show. Still, things didn’t look promising when he erupted into flames on the snowy slopes of Sweden last night. There wasn’t really a good place to run. Good thing Pam is on her way to save him. She just has to get there in time. We think she’ll find a way.

2. Will Sookie and Alcide last?

It’s been a long time coming, sure, but Sookie’s got a thing for a lot of men. We haven’t forgotten that she told Sam she thought the two of them would always end up together only an episode before she almost becomes Warlow’s vampire bride and then Alcide’s leading lady. Sookie (Anna Paquin) changes her mind about men with each season of the show. It’s hard to keep up. And we’re not sure Alcide will be able to either.

Just when you thought they’d exhausted the supernatural possibilities, Hep V mutates and creates vampire/zombies. As we left Season 6, the zompires (vambies? It’s a work in progress…) stalked toward Bon Temps. The vampires are prepared to save the humans in exchange for blood but to those townsfolk who thought they were too good to share, things aren’t looking so bright. Something tells us it’s going to be a massacre.

4. Jason and Violet getting it on

Even six months down the road, Violet is still holding out, though she’s allowing Jason to make her really happy. Again. And again. Each night. And she isn’t returning the favor. He still hasn’t given up yet, though, which is weird. Jason likes a girl enough to wait for her? Say what? Poor guy will deserve some sexy time in Season 7.

Bill (Stephen Moyer) wrote a bestselling book to appease Sookie, but it hasn’t quite worked for him. (Fame and glory for him doesn’t really seem like justification and penance for her.) He offers to protect her from the vampire/zombies, but Alcide flexes his big, bad muscles and tells Bill he’s got enough brawn for the both of them. Still, I think they’ll band together in the war against the zompires (according to Urban Dictionary, that’s the correct buzzword).