Kim Kardashian and Kanye West take 2-month-old North on her first trip to be with family during a funeral. 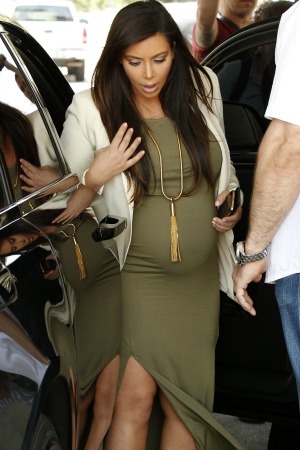 A baby’s first real trip should be a time for celebration, but Kim Kardashian and Kanye West’s first trip with baby North was a sad one. Us Weekly online reports that the family traveled to Oklahoma this weekend to attend the funeral of West’s grandfather. West’s late mother, Donda West, was also buried in Oklahoma. She passed away at the age of just 58 on Nov. 10, 2007, due to complications following cosmetic surgery.

Grandpa Williams apparently had a soft spot in his heart for the mother of his grandson’s baby girl. “She is beautiful — and she’s just as sweet as she is beautiful — and that’s what I liked about her!” Williams told the Daily News about Kardashian. Adding, “She was just down to earth. She’s rich, and those kinds of people, they’ve got everything.”

Though it may have been her first trip out of her home state, this wasn’t the first time that baby North was spotted out and about with her parents… well, sort of. Last week, the family was seen on an outing in Los Angeles for a doctor’s visit. But though baby North has been out in public a couple of times now, no one has actually seen the baby. Mom and dad have kept the little girl covered up with blankets and seem to be waiting for the perfect moment to reveal her to the world.

While Kardashian and West have claimed they aren’t holding out so that they can sell photos of the baby, sources close to West claim that he’s trying to get North on the cover of Vogue.