A new Match.com poll found that singles want to set up birthday boy John Stamos with his Full House wife, Lori Loughlin. Who else did they pick for the gorgeous bachelor? You might be surprised. 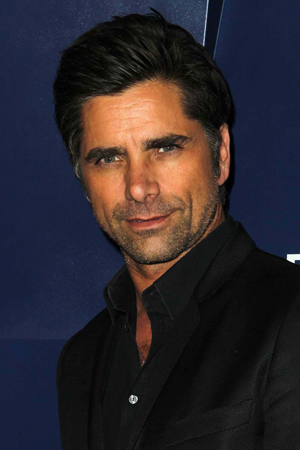 The Necessary Roughness hottie turns 50 today — and yes, he’s still single! The actor — who was once married to model Rebecca Romijn — hasn’t publicly dated anyone in years, but Match.com users want to change that.

The online dating website polled 1,000 singles on whom they want to see Stamos settle down with — and 60 percent chose his Full House onscreen wife, Lori Loughlin. The pair played married couple Uncle Jesse and Aunt Becky from 1987 to 1995. They had amazing onscreen chemistry, which is not surprising since Stamos recently revealed they dated in real life.

“We were friends, we were on the soaps together and we actually did date,” Stamos told HuffPost Live in July. “We went on a date to Disneyland before, you know, before we were both married. In real life, when we were 18, 19 years old.”

Unfortunately, this relationship is probably just going to stay in our dreams since Loughlin is married to clothing designer Mossimo Giannulli. That’s not to say Stamos doesn’t think about her.

“We did have some off-timing, but no disrespect to her family and her husband now, I would say that she could be the one that got away,” he told HuffPost, adding that he “adores her.”

Stamos still has a few other eligible matches. According to Match.com users, the Oikos pitchman should date these women:

Wiig would be a good choice — especially since she just broke off her relationship with The Strokes’ Fabrizio Moretti. We’re a little meh on the rest: Lawrence is too young, McCarthy is dating New Kids on the Block singer Donnie Wahlberg and Rowland just doesn’t seem like a likely fit.

Or, we’re available. Think about it, John. We’re ready for our Greek-yogurt date whenever you are.

Who should be John Stamos’ new girlfriend? Sound off below!