Dexter has Hannah on the brain while Zach loses his. Is the brain surgeon back? Or maybe s/he never left. 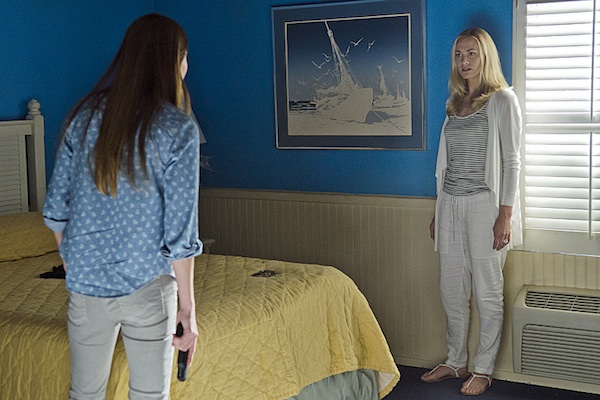 As we head closer and closer to the series finale of Dexter, Dexter’s head isn’t in the game. It’s on thoughts of Hannah. As much as we like seeing Dexter (Michael C. Hall) with deep emotions, we want the killing machine who takes down the bad guys! Somehow, we think the end of this episode just may have fueled his fire. Fingers crossed.

Deb (Jennifer Carpenter) shows up at Cassie’s crime scene and isn’t concerned so much with the killer as the status of Hannah. Dexter says he’s on top of the situation, but all he can imagine is being on top of Hannah.

Quinn’s on the trail

Quinn noticed that Cassie’s killing is similar to Norma’s and asks Dexter if he thinks Zach could be involved. Dexter plays dumb and suggests Quinn stay out of the case.

He doesn’t listen and instead meets with Cassie’s boyfriend and shows him a picture of Zach. He doesn’t know Zach but says Zach looks familiar.

Jamie is really taking Cassie’s death hard. She tells Dexter she can’t be at his house right now, but offers to take Harrison with her to Quinn’s place for a few days. They moved in together.

Dexter finds a drop of blood under Cassie’s nails. It’s a match to Zach. Dexter hides it from detectives, as usual, and tracks Zach down himself. He discovers credit card purchases at a hotel in the Keys and heads to track him down, intent on killing him. Dexter even makes a date out of it and invites Hannah along for the road trip.

After the trip, Dexter plans to get a new identity for Hannah and get her out of town. Hannah agrees it’s time. 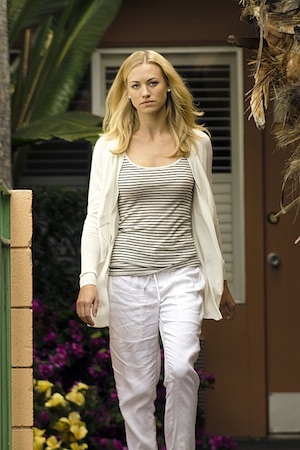 Deb tells Jacob about Hannah and the $250,000 reward for her capture. Jacob starts putting together the pieces about Hannah’s whereabouts. He even discovers her husband isn’t in New York.

When Jacob and Deb show up at the dock to arrest Hannah, they discover her boat is gone.

Deb takes things into her own hands. She somehow discovers where Dexter’s headed and follows after him to take care of Hannah.

Zach gives it his best

In the car, Dexter tells Hannah about Evelyn and Zach.

Dexter arrives to Zach’s hotel and finds Zach’s room covered with plastic like a kill room. There are knives lying out. Zach’s clearly trying to mimic Dexter’s technique.

Dexter confronts Zach. Zach doesn’t know Cassie and says he didn’t kill her. He says he went after a guy named Shawn Decker who killed a girl during spring break when Zach was in high school. Zach killed him and left him in the trunk of his car.

Dexter coaches Zach. Hannah stays to clean the room while Dexter and Zach go to dump the body.

Zach warns Dexter to be careful of the door handle. It cut Zach’s hand a few days ago. Dexter wonders if the cut is how Cassie’s killer got Zach’s DNA.

A Deb and Hannah heart-to-heart

Deb finds Hannah at the hotel and tries to arrest her. She refuses and the two talk it out.

Dexter arrives back at the hotel room. Deb admits she put a GPS on Dexter’s car and that’s how she found him.

After talking with Hannah, Deb seems satisfied that Hannah really does love her brother. When she meets with Jacob again, she pretends like she couldn’t find Hannah.

Deb quits her job and considers rejoining the police force.

A copycat or a copy back?

Dexter brings Zach to Evelyn who insists the group, including Hannah, join her for dinner. Evelyn is impressed with Hannah and Dexter’s relationship.

Hannah says she’ll let Dexter know where she ends up. He leaves her a passport with the name Claire Thompson.

Dexter and Hannah sleep together.

When Dexter gets back, he finds Zach dead with the top of his head cut off. Either the brain surgeon is back or someone is getting really good at copying murders. Evelyn is holding the jar with a piece of, assumedly, Zach’s brain.

Dexter goes to Hannah before she leaves in the morning and tells her not to go.