Marisha Pessl’s Night Film is one of the most highly anticipated books of the fall season, and with good reason. It is a dark and twisting tale that will suck you in and leave you gasping for more. 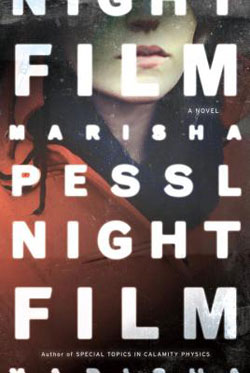 The central character of Marisha Pessl’s Night Film is disgraced journalist Scott McGrath. McGrath has long been obsessed with legendary and reclusive director Stanislas Cordova. After going after Cordova years ago with a seemingly unimpeachable source, McGrath lost everything: his family, his job, the respect of his peers.

McGrath has started, not always successfully, to rebuild his life, but when Cordova’s daughter Ashley is found dead he finds himself immediately pulled right back into the myth of Cordova. Ashley’s death is officially ruled a suicide, but McGrath realizes that she’s the woman he saw following him in the park in the middle of the night only a couple of weeks earlier. Things just don’t add up, even before you factor in Ashley’s mythic father.

McGrath begins to investigate Ashley’s death and the weeks of her life leading up to her final moment and finds himself joined by two other people who also found themselves touched by Ashley in her last days. Together, the three strangers attempt to follow Ashley’s movements, to discover whether she truly killed herself. If she did, why? If she didn’t, then how exactly did she end up dead?

Night Film is a supremely twisted book. As a work of suspense it is top-notch. Pessl has created a story that twists around in on itself, that is at once completely consistent and ever-changing. It isn’t often that a novel of 600 pages can be said to simply fly by, but such is the case with Night Film. It sucks you in in a way that makes it possible to sit down and read 200–300 pages in a single sitting.

A perfect complement to Pessl’s deliciously written novel are the ephemeral documents that are interspersed throughout the pages. Things like McGrath’s internet searches in pursuit of the truth about Ashley, her medical records, pages from a website devoted to Cordova and his darkly foreboding films. The documents take an already rich story and add an additional layer of complexity that make it an even more engaging and amazing read.

Night Film is the book everyone will be talking about around the water cooler this fall, and perhaps for years to come.