Gone are the days when one music video was enough. Now, we need two — the official music video we are used to and, before that, a smaller lyric video released when the song is. Think it’s overkill? Katy Perry and Lady Gaga don’t. 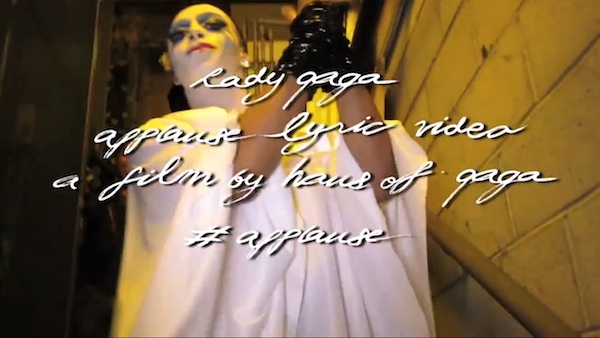 Remember MTV? It was this cable channel that only played music videos. Everyone — teen moms, people from Jersey, those in the real world — would gather around their huge 30-inch televisions and watch in hopes of catching a glimpse of their favorite video.

Check out the best “Blurred Lines” parodies on the Internet >>

Well, now we have YouTube. We don’t need to wait to watch the videos for our favorite songs.

Except it takes so long to make a music video. We may not even get to watch the official music video until three whole weeks after the song is released. Who can wait that long?

If only there were something to tide us over.

Enter the “lyric video.” As the name suggests, in a lyric video, the words to the song — not the artist — are the main element. Usually big on graphics but short on production value, these videos are much faster and cheaper to produce than official music video productions.

Did One Direction make the best video ever? >>

Of course, using words as the main part of the video isn’t anything new. Bob Dylan famously held up words on cards for his “Subterranean Homesick Blues.” Prince‘s “Sign o’ the Times” had lyrics that animated and pulsed to the music. When George Michael refused to make a video for 1990’s “Praying for Time,” the record label released a video using white text on a black background that was as beautifully simple as the song itself.

However, those lyric videos were the official videos for the songs. In this day and age, one video isn’t good enough anymore. We need a music video to watch until we can watch the official music video.

And it seems we can blame CeeLo.

When CeeLo Green released his song “F*** You” in 2010 (also known as “Forget You”), everyone started talking about it, but Green hadn’t yet done a video that people could post and share.

So Green and his label put together a video with the “Forget You” lyrics over colorful backgrounds, and thus a viral hit was born — months before the official video was ready to be released.

Green told the Associated Press that doing a lyric video “was a chance to put out a video and give people a chance to follow the lyrics, helping them understand the song more and gauge their interest.”

Squids, tans and Christopher Walken: Check out these crazy videos from the 2000s >>

So in essence, the lyric video is a way to connect with the fans and keep them talking until the music video is ready.

And, as we saw last week, you can’t put out a song without releasing the accompanying lyric video at the same time. Just a day after both Katy Perry‘s and Lady Gaga‘s new singles were leaked early online, their lyric videos were ready and released to the fans.

Katy’s “Roar” lyric video is an emoti-filled text-message conversation with her friends as she is waking up and getting ready for the day. Personally, the only two things I could think of while watching it were that she unnecessarily uses a lot of toilet paper and that putting your feet on the dashboard while you’re in the passenger seat of a moving vehicle is one of the most dangerous things you can do.

Lady Gaga’s lyric video for “Applause” takes us to a wild drag show at the West Hollywood hot spot Micky’s. There, with her fans and some amazing female impersonators, we get the lyrics scrawled across the screen.

For most artists, this video would actually pass muster as the “official” video for the track, but not for Gaga. If this is the lyric video, the official video will probably be a spectacle.

As unnecessary as they are, it seems that lyric videos are here to stay. But if this is the way that music is going, we have to ask, “What’s next?” Recordings of a song released before the song is released?

So what do you think of the lyric video: Is it a needed addition or an unnecessary extra? Let us know in the comments below.