James Marsden isn’t the Hollywood hunk we think he is. The actor swears that beneath his megawatt smile is a hidden geek. 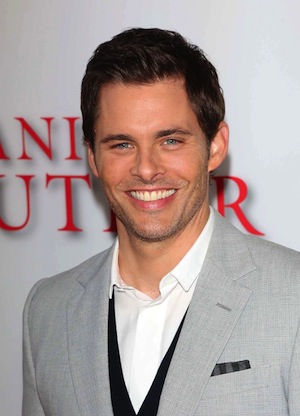 Don’t let James Marsden‘s sparkling eyes fool you. At his core, he’s a big dork. Or at least that what he claims. This month, the actor appears as the charismatic President John F. Kennedy in Lee Daniels’ biopic, The Butler.

In a promotion for the film, Marsden appears in the latest issue of Out magazine, where he discusses Real James vs. Hollywood James.

Marsden tells the magazine (via People), “I’m actually less comfortable being the smoldering hot guy. I know I have a face like a model, but I’m actually just a goofy drama nerd underneath.”

Does James Marsden have a Brazilian baby mama? >>

Speaking of drama, Marsden had to put his acting chops to work in The Butler. He previously starred in blockbusters like X-Men and fan favorite The Notebook. Daniels felt he was the perfect fit for this historical drama.

The director reveals, “I saw a thespian waiting to bust out from his big tent-pole movies. I picked him because I think he embodies the youthful side of Kennedy that gave so many people hope.”

Lee Daniels’ The Butler is in theaters now.