Switched at Birth Season 2 has been great, but there are a few things that might make the show even better if they just went away.

Overall, the second season of Switched at Birth has been a good one. Running on ABC Family, the series is the perfect summer soap opera but with the added interest of having deaf characters. There’s no denying that the show has brought a lot of great attention to the deaf community and that it has probably taught more than a few people tolerance toward those with hearing impairments.

Switched at Birth Season 2 Episode 19 recap: There are always consequences >>

But once you look past the show’s plus points, there are also some things about it that are — for lack of a better word — annoying. These are the things that might make the show just a little more enjoyable if they were to go away forever and ever.

It’s terrible to say it, but ever since Toby got engaged to Nikki, his storyline has just been one big bummer. When was the last time Toby actually smiled or looked like he was enjoying life? Sure, Toby’s life hasn’t been all rainbows and sunshine, but between the lack of music and the constant bickering over wedding plans, it’s just not nearly as fun to watch him anymore.

OK, so as of last episode, Angelo and Regina did sleep together (again). For one brief moment, it looked like they could actually be happy together, but as soon as the glow wore off, Regina said they couldn’t do it again and moved out. Here’s hoping that means they can both move on, because the back-and-forth business is getting very old.

Switched at Birth Season 2 Episode 18 recap: Daphne and Jace are on a roll >>

Jace getting away with being a jerk

Jace seemed like a great character when he was first introduced. He was sweet and funny and learned ASL like a champ, but soon enough, he was pushing Daphne to do things that weren’t right. The more we learned about him, the more it became clear that he wasn’t a nice guy at all. At this point on the show, Daphne has been left holding the bag for things that they both did together. Here’s hoping his comeuppance is coming soon. 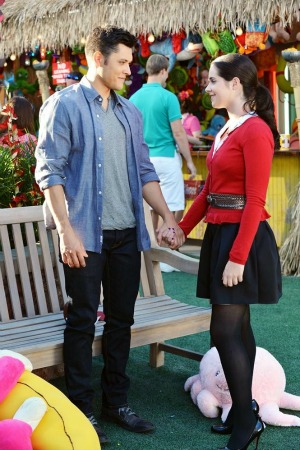 Having a romantic relationship between two characters that is nothing but smooth sailing would make for boring TV, but it seems like poor Bay and Ty just can’t seem to catch a break. Every other episode, they are either madly in love with each other or one of them (usually Bay) is screaming mad at the other. Real-life couples would probably have broken up by now. How about they settle down and just like each other for a little while?

Switched at Birth Season 2 Episode 17 recap: Since when is blackmail OK? >>

John as a senator

John running for Senate seemed like a fun idea for the show when it first happened, but now it’s brought on a bunch of complications. Admittedly, not all of the complications are his fault, but sometimes it feels like things would be more fun if he just went back to the car wash for good. After all, if he never became a senator, then Coto wouldn’t be in anyone’s lives.

Is there anything that has annoyed you about this season of Switched at Birth?