Kim Kardashian fans rolled their eyes as Kim sent a dramatic, nasty tweet to Katie Couric. Here are some of the best fan responses. 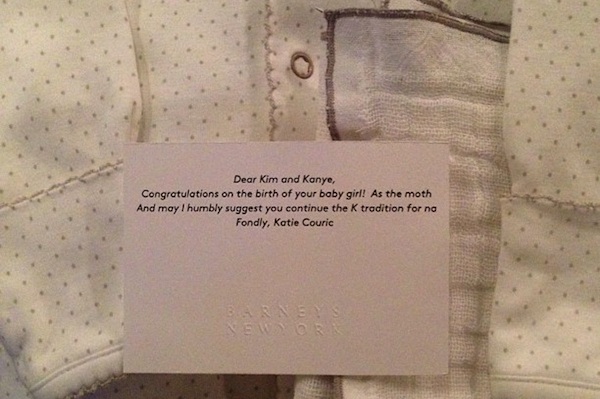 But many of Kardashian’s nearly 10 million Instagram and Twitter followers think the new mom went too far.

The Instagram photo — which has since gone viral — at first glance seems like just a snapshot of a lovely baby gift: newborn clothing from luxury retailer Barneys. Yet, Kim was clearly offended by the odd card from Couric accompanying the gift, which said the following:

“Dear Kim and Kanye, Congratulations on the birth of your baby girl! As the moth And may I humbly suggest you continue the K tradition for na”

Yes, you read that message correctly. Something about a moth and what seems like a passive-aggressive comment about Kris Jenner and her decision to give all five of her daughters names that begin with the letter “k.”

Kris Jenner swoops in to protect Kim from Obama dig >>

It’s not clear how Kardashian interpreted the card, but she captioned the photo harshly: “IHateFakeMediaFriends #MayIHumblySuggestYouNotSendGiftsThenTalkS***”

Within minutes, Kim Kardashian’s Instagram followers responded negatively to her insulting caption. Here are comments from just a few of Kim’s Instagram fans, who are clearly over the dramatic baby gift scene.

Kim Kardashian also posted her anti–Katie Couric blast on her Twitter account. (Of course she would!) While Kim did receive more support from her Twitter audience, she still had fans call her out for her perceived bad behavior.

Then again, Couric did recently talk to InTouch Weekly magazine and was condescending — though honest — when asked about the Kardashian family’s success.

Said Couric to the celebrity news outlet, “I don’t understand — why are they so famous? I think it’s mostly teenage girls that are interested.”

“I’ve met Kim before and I think she’s a really sweet person,” Couric said. “I was responding to a reporter’s question, and explaining how I’m intrigued by the public’s fascination with her family.”

Couric continued, “I didn’t mean to hurt her feelings.”

Katie also mentioned that her Barneys gift was also not intended to be a veiled insult to Kardashian.

“The gift is genuine and I’m happy for Kim and Kanye,” Couric said.

Kim Kardashian may want to rethink her future tweets and Instagram photos if she wants to keep some of her fans — and the spotlight.