As the first openly gay WWE star, Darren Young took a big risk by coming out, but the pro wrestler said it was the right thing to do. 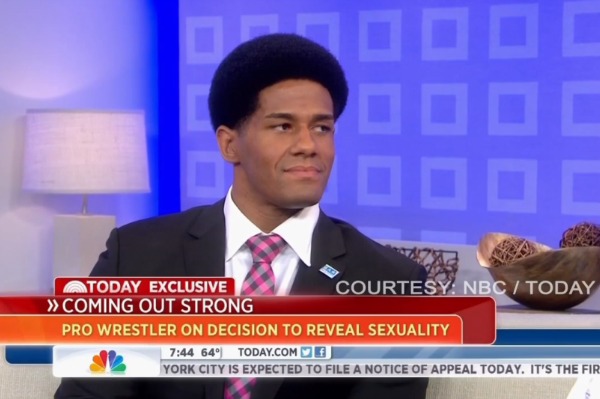 WWE star Darren Young came out unexpectedly to TMZ during an unplanned interview earlier this week, and now the pro wrestler is telling us why. Quite simply, it’s the right thing to do, and he’s in love!

“I felt like it was the right place and the right time,” Young told Matt Lauer during an appearance on Today. “I feel by coming out I’m going to make a big difference in a lot of people’s lives. I’ve been suppressing these feelings for so long in my life — I’m going to be 30 on November 2 — and I just need to be happy. Until the day I’m six feet under I will always say I want to be happy, and I’m happy now.”

Still, it was a big risk to take in a heavily macho industry. “I was terrified,” he admitted. “And I feel like anybody in my shoes would feel the same way. But, you know, it took some guts.”

Turns out, he got some advice from a very good source.

“I actually talked to Jason Collins,” Young says of the NBA star who came out himself last spring. “And he gave me some advice on how to handle the situation and how to cope with it and how to be positive and how to be a strong individual.”

“I’m in love,” he revealed. “And I wrestle for one of the greatest organizations in the world, the WWE. I’m a lucky man.”

The WWE threw their support behind Young yesterday, saying in a statement that they are “proud of Darren Young for being open about his sexuality.”

“We will continue to support him as a WWE Superstar. Today, in fact, Darren will be participating in one of our Be A Star anti-bullying rallies in Los Angeles to teach children how to create positive environments for everyone regardless of age, race, religion or sexual orientation.”

His WWE co-stars went wild on Twitter expressing their individual support of their friend, too.

John Cena told TMZ, “Darren’s a great guy. That’s a very bold move for him. And congratulations for him for actually finally doing it. For us, it’s entertainment, and if you’re entertaining you shouldn’t be judged by race, creed, color or sexuality as long as you’re entertaining.”