Beyoncé was seen leaving a Miami resort with yet another new hairstyle, this one longer than the pixie cut she debuted to the world just last week. 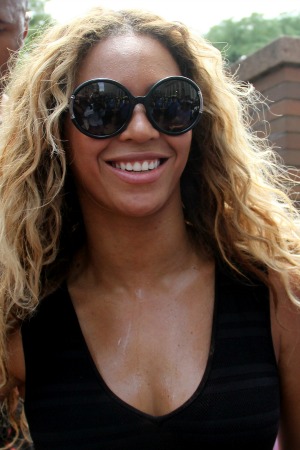 Last week, Beyoncé shocked the world (okay, so maybe just her fans) when she debuted her new, short pixie haircut. Losing her long, blond locks, the singer proudly posted pictures on Instagram that showed the new ‘do in all its glory.

Could it be that Beyoncé is already experiencing remorse over the loss of her long hair? It’s barely been a week, but already the singer is sporting a new, longer style. DailyMail.com has posted pictures showing Beyoncé with a reverse bob that is longer in the front and shorter in the back. She wore the style with a bright gold headband, along with a loose tank top and jean shorts, as she was seen leaving a Miami resort with her daughter Blue Ivy.

Beyoncé gets tangled with a fan onstage >>

It doesn’t take an expert to see that the new hairstyle is quite a bit longer than the super-short cut she revealed to the world last week. While it’s possible that the singer was just wearing a wig and playing with something new for the day, chances are the longer locks are the result of a weave.

Even Beyoncé’s hairstylist, Kim Kimble, was shocked to find out that her client had chopped off all of her long hair. Kimble admitted that she “got a little teary-eyed” when she saw the new ‘do, but also saw it as a form of empowerment. “Maybe I’ll cut my hair off now,” Kimble said. “Short hair, don’t care!”

Considering how Beyoncé’s new style made waves when it hit the news last week, there could be a lot of fans out there who also decided to chop off their hair as a sign of empowerment for themselves. What will they think now that the singer has added extensions to make her hair longer again? Will they too get extensions to match the new bob?