The Dream drops the new single titled “Too Early,” and it strikes strangely close to home. Is the song about him and his ex? Share your thoughts with us! 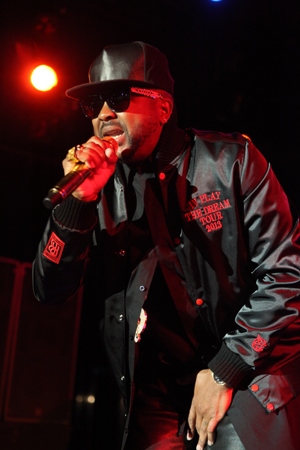 I was this close to filing a missing person report for The Dream until he reappeared with this single.

All I know is he came out with the fierceness, dropping tracks like “Fast Car” and I was in awe of his range, then miraculously he impregnated my precious Christina Milian (sorry, he’s a singer, not really a looker). Then I felt like he disappeared, am I right? He even released the album IV Play this year, but it’s hardly been memorable. Wonder what’s wrong!? Maybe it’s just me.

A painful past with an ex can stir up quite the explosion in the news, especially with Russell Brand! >>

In the calm after the storm of their breakup, Madame Milian gave a shady interview indicating this crooner isn’t spending the time he should with his progeny. So when this single “Too Early” featuring Gary Clark Jr. emerged, and lyrics like “can’t see my daughter” are recited, one cannot help but assume this is a track that hits close to home.

Read all your music updates on the go by signing up for our newsletter! >>

It’s a super slow, melodious expression that is more introspective that hit-worthy. But music isn’t just out there to sell millions, is it? It’s to be an expression for the artist and the listener, and I think this accomplishes just that. Gary Clark Jr.’s addition doesn’t particularly stand out, but the guitarist-singer does add a bit of dimension to The Dream’s lulling sound.

One astute YouTube commenter remarked that the “autotune gets in the way,” but I think we all can still vibe with the track. The Dream mourns in this song about his love, but the separation of the couple seems like it was a long time coming. Sounds oddly applicable to his real life, but then again, celebrity gossip can’t really tell us everything about his real love life, can it?

Taylor Swift’s love life is always in the news — who is she likely to date next? >>

Again, it’s not going to be the headlining feature for The Dream’s career or anything, but the song is just enough laid-back-cool funky-fresh for old fans to welcome him back. And if you have any doubts on the likeability of the song, give it a second play like I did, and you will dispel them.

Not bad, but not amazing. Still worthy of adding to your playlist, though! Thoughts readers? Is it about his ex or not at all? Agree or disagree?

What else can you read to inspire your playlist? Check these out: