Jennifer Aniston is arguably the coolest actress of our time — and one of the coolest things about her coolness is the unassuming, quiet way that she’s become wicked cool. This girl has taken it on the chin publicly for things that are hard to suffer privately with tremendous grace and candor. Here, we honor Jen with a photo journal of her recent awesomeness. 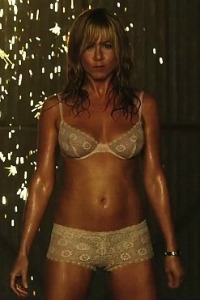 Hard body
Let’s open up with Jennifer Aniston‘s now famous image of stripper turned soccer mom in We’re the Millers. The woman is 44 frickin’ years old. Sure, she’s never had kids, but you can’t take this away from her. After you turn 40, regardless of whether you’ve given birth, a gut magically appears where there wasn’t one before. Nature’s way of producing estrogen (through belly fat) won’t be ignored. You have to work your a** off to get your gut to go away. She looks incredible and is an inspiration to women who are not-still-in-their 20s. 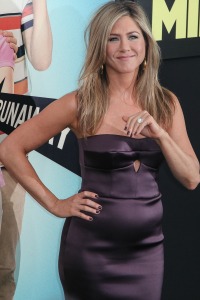 Food baby
On the flip side of Aniston’s hard body, earned the hard way, is this. Pop culture wouldn’t be the same if Aniston wasn’t accused of being pregnant at least every three months, and this shot opened another door on the revolving “is she pregnant?” topic. You’d think Aniston would be ready to issue the world a middle finger at this point on the topic of her childbearing. Instead, she won women over everywhere by responding to this photo with, “I gained a couple pounds.” We feel ya, Jen. Haven’t we all? 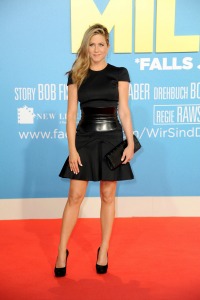 Screw you guys
We can’t help but feel that Aniston might have been being a bit of a smart-a** when she hit the red carpet in Germany wearing something that looks like a corset across her midsection. See what we mean? Jen is too cool to actually give anyone the middle finger, so she does it in her own unique way. She’s not going to stumble out of a club at 3 a.m. or lash out at photographers in response to constant scrutiny. She’s going to wear a dress that says, “F*** you guys. I’m not pregnant.” 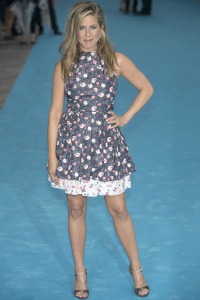 Bringing ’50s back
Be still our hearts. If Aniston’s departure from black dresses sparks a ’50s floral dress renaissance, we are going to personally fly to LA to give her a ginormous hug. (If we can get past security, of course.) While in London, Aniston sat down with the terminally adorable British DJ Chris Stark and played right along with his awkward commentary and questions. It was like watching Colin Frissell from Love Actually interview one of the most famous women in the world. Priceless. (See the interview below.) 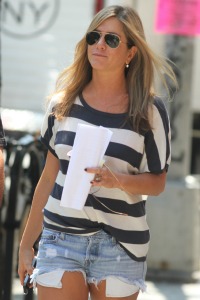 Farmers Market?
Arriving on set, Aniston rocks the look that made her famous — the girl next door. She reminds us of someone we’d see at a farmers market on a Saturday. The Friends star has been keeping it real in recent interviews when asked about her engagement to fiancé Justin Theroux. On The Talk, Aniston revealed that she will get married when “we’re not rushed, and no one is running from a job or to a job” and that “we already feel married.” Is there a nicer way to tell the world to shut the hell up? 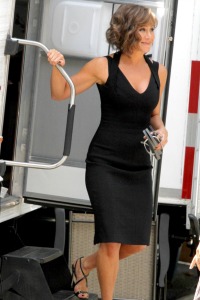 Discretion pays
Here, Aniston is looking adorable on the set of Squirrels to the Nuts, her new movie with Owen Wilson about a married director who falls for a prostitute turned actress. Aniston hand-picked her favorite maître d’, Dmitri Dmitrov from West Hollywood’s Tower Bar to play a maître d’ in the movie. Aniston told the New York Times, “He creates this little pocket of safety. A place where you know you’re not going to get sold out by the waiter, a patron or the valet guy.” Did Aniston just find the coolest way to encourage Hollywood’s service industry to employ a little more discretion?