In this episode of Burn Notice, called “Things Unseen,” Michael is asked to do something impossible, while Fi asks Sam and Jesse to help her save Carlos from an old enemy. 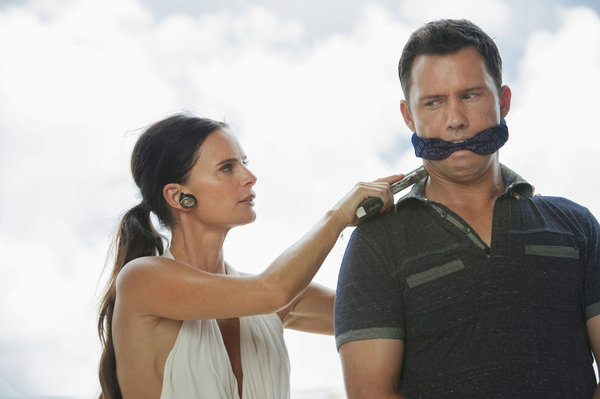 How could I have been so wrong? That is the question that I found myself asking when this episode began. At the end of last week’s episode, I had been so certain that the look on Michael’s (Jeffrey Donovan) face meant that he was done messing around with James, that he’d realized what a monster the guy was and was ready to take him down. I guess, in a way, I was right as Michael still does have every intention of taking him down, but I totally missed the part about Michael also being willing to do whatever James asked of him to get the mission done.

This episode began when Michael learned that James wanted him to take out an old friend. It’s definitely not the first time that Michael’s been asked to do something like that and I had every confidence that it would never actually get that far. Even though Michael has been going farther and farther down this dark path he’s been on, I never thought he would actually do it. When he pulled that trigger, I actually felt tears in my eyes — not because I particularly cared about Roger (although he seemed like a cool guy), but because I felt like that step took Michael to a place I fear he may not return from. Will we ever get Michael back after this? The realist in me says “yes, of course,” because I know that the series is close to its finale and there’s no way the writers will leave Michael like that. But at the same time, it feels like I can never look at him the same way again and that makes me very sad.

Carlos is saved, but at what cost?

As for Fi (Gabrielle Anwar) and Carlos’ (Stephen Martines) story, I found it interesting how his troubles with a drug runner that wanted him dead led right back to Michael. On the one hand it was extremely lucky that Michael was around for Fi to call and that he was able to offer the help needed. I guess you could also say that it was lucky that Michael had killed Roger, because otherwise Sonya and James may not have been inclined to help. But Carlos’ reaction to finding out about the seven people who died so he could live… I remember a time when that would’ve been Michael’s reaction. And while I’m happy that the door is obviously sliding open again between Fi and Michael now that Carlos will be gone, I feel bad that it had to happen the way it did.

Once again, this episode proved that this show is going to get much darker before it ever gets light again. As much as I am enjoying the ride, I can’t help but to hope that we get a glimmer of that brightness that used to be a part of Burn Notice before it is all over.

Fi pointing out that Michael was defending a man he was supposed to take down.

“Don’t worry, I know where to draw the line.”
“Like you did with Sonya?”

The Supernatural fan in me got a little giddy at the sight of “Jo” (Alona Tal) and “Baltazhar” (Sebastian Roche) shaking hands.

Fi playing the scared girlfriend until she could disarm one of the thugs threatening Carlos.

Jesse reassuring Carlos that they had his back and that he shouldn’t have to pay for doing the right thing.

I know it stood for “Department of Health,” but I still had a giggle at “DOH” on the backs of Sam and Jesse’s jumpsuits.

Poor Michael having to aim a gun at his friend, while that friend was desperately calling him to try and help.

Literally saying “No, no, no, no, no!” and nearly bawling when Michael shot Roger. Where did my Michael go???

The look on Nando’s face when he realized his plan had seriously backfired.

Carlos telling Fi that she was traveling down a path with Michael and he couldn’t go with her.

What did you think of this episode? Were you shocked when Michael did what he did?