At only 17 years old, Claudia Lee already has two years on the popular CW series Hart of Dixie, a starring spot in the new sitcom Surviving Jack, and a fierce role on Kick-Ass 2 under her belt. Did we mention she’s also a talented country singer? Find out how this refreshingly grounded starlet keeps her head about her in Hollywood

In many ways, Claudia Lee is your typical teenage girl. She loves low-key coffee dates with her boyfriend, going to the movies with her besties and spending quality time with her family. Of course, Claudia isn’t your typical teenage girl — she’s a busy young actress. We recently caught up with Claudia for our latest Girl Crush Extra to see exactly what it is that keeps her going.

Her run-of-the-mill moments are sandwiched between movie premieres, press junkets, shooting on location and all of the other aspects that come with being a successful entertainer. “I get tired, but it’s what I love to do, so it’s kind of like my fun,” the fresh-faced beauty told SheKnows over lunch at the West Hollywood hot spot, Urth Caffé.

And, despite the fact that she had lost her voice from a series of recent press appearances, she doesn’t see herself slowing down anytime soon. “I think when you love something, you never get tired,” Claudia mused. “You just want to keep doing it.”

Between spoonfuls of tomato soup to soothe her overworked vocal cords, Claudia joked to us that she’s been trying to get to Hollywood since she took her first steps. In an effort to maintain their sanity and pacify her acting bug, Claudia’s parents enrolled her at the age of 13 in a theater camp hosted by the New York Film Academy.

In a serendipitous twist that her parents clearly didn’t see coming, Claudia’s roommate — whose father owned the acting studio where hit sitcoms such as 30 Rock and Ugly Betty were filmed — introduced her to a family friend, who just so happened to head up Abrams Artists Agency.

She jumped at the agency’s offer to give acting an “official” try and the rest, as they say, is history.

The show that started it all 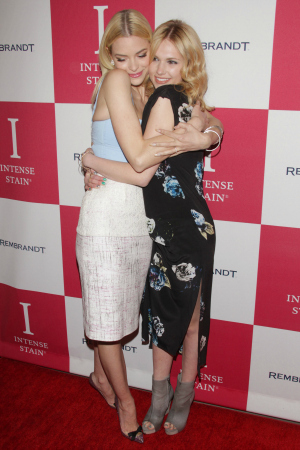 It wasn’t long before Claudia landed her first big break as Magnolia Breeland on the CW series Hart of Dixie — a role she credits with much of her success today. “Working on Hart of Dixie for two years, and ongoing, is really amazing,” she said, continuing, “I wouldn’t have the opportunities and the things I have today without it.”

One of her favorite aspects of filming the show? Getting to work with the likes of super-chic actresses Jaime King and Rachel Bilson. “Jaime is like my big sister,” gushed Claudia. “She’s guided me and given me so much advice!” Advice, she says, about being careful who you surround yourself with and being prepared for the pressure that comes with fame — and, naturally, on fashion.

“We bond over fashion like no other!” she exclaimed. A fashion junkie, Claudia cops to pining over Jaime’s closet (particularly her shoes) and how killer her figure looks in everything… even now that she’s sporting a “tiny” baby bump.

She admits that the two often chat about their characters’ wardrobe choices. “We sometimes laugh at our style on the show because it’s just not us,” Claudia said. If they were to wear their characters’ cute little Southern belle ensembles off set, she and Jaime agree they would “punk it up a little bit” with a leather jacket or some Doc Martens.

Or, perhaps, a style from ShoeMint — Rachel Bilson‘s footwear collaboration with stylist Nicole Chavez. “I love supporting ShoeMint… I wear them all the time,” she noted. As for the actress behind the footwear, Claudia is just as enamored. “Rachel is so sweet,” she said, “and she really is like the heart of our show. She’s so loving.”

With the show moving into its third season, Claudia looks forward to episodes she hints will be chock-full of new characters, new story lines, and new love triangles — not to mention a whole lotta cute guys. So will Magnolia be making a love match?

Claudia wouldn’t say for sure, but she certainly alluded to it. “I think Magnolia needs some cute arm candy,” she laughed. 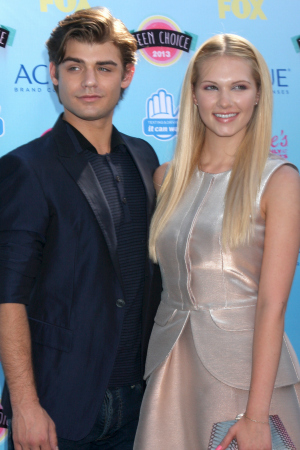 In real life, though, the pretty starlet isn’t suffering in the arm candy department. She’s currently dating cutie-pie Teen Beach Movie actor Garrett Clayton who, at 22 years old, has five years on her.

“My parents understand that I’m a really mature person and they would rather me be with someone that respects me and who’s a gentleman, and who also respects their beliefs and their morals,” she said. Her parents, she reveals, call her beau a class-act.

Which isn’t to say Garrett wasn’t nervous before meeting Mr. Mirkowski. “My dad is pretty intimidating… he has a Polish accent, and sometimes when he says things people don’t know how to take it,” Claudia explained, “so Garrett was pretty scared to meet him. It was so cute!”

Claudia maintains that she is always very honest and open with her parents — which means she probably had some explaining to do about her upcoming role in Kick-Ass 2, which hits theaters tonight.

“I don’t think people are ready for what’s coming for them,” she laughed. “If you love the first one, the second one is heightened to a new level and you’re going to love it even more.” The action-packed comedy, she vows, is incredible, jaw-dropping and will have you on the edge of your seat.

She also can’t wait for fans to catch her work in a sitcom coming this fall called Surviving Jack. In it, Claudia plays Rachel — a teenage girl in the ’90s who, similar to her Kick-Ass 2 character, pushes Claudia out of her comfort zone.

“Rachel’s father is the one that runs the house and is just like ‘It’s my way or the highway,’ but my character just gives it right back to her dad,” Claudia said. “She’s a force to be reckoned with.”

As if starring in two sitcoms and a major movie wasn’t impressive enough, Claudia has a new album in the works. “I enjoy writing about real-life topics — I think those are the most intriguing and honest, and I think when a song is really honest to the songwriter it is so much better,” she said of her style.

Her dream duet partner? “I would love to collaborate with Ed Sheeran,” she said. “His lyrics are like poetry, but they’re not — it’s quirky; it’s cute; it doesn’t make sense but it does make sense. I really like that about his music… it’s like a hidden message.”

What the future holds

Looking forward, Claudia — like most young women her age — hopes to cram college into her busy schedule. On the other hand, her goals outside of being an undergrad underscore just how remarkably different she is from the average teenager.

“My next big, big goal would be to get an Oscar one day,” she said.

Until she gets to read her acceptance speech though, Claudia wouldn’t mind learning a few tricks of the trade from an actress who knows a thing or two about those golden statues. “I love Meryl Streep,” she exclaimed. “I think she is completely captivating — she just knows how to create her characters.”

But how does the 17-year-old plan to stay grounded enough to achieve her goals, when so many young actresses are falling apart around her?

For one, she has a curfew (and she wouldn’t have it any other way). But, more important, she keeps her family close by. “I really pray for people like that,” she remarked about her troubled peers. “And I know that sounds so Magnolia Breeland — so Southern belle — but someone who has those types of thoughts and actions is, I really believe, confused with themselves and their family base isn’t there.”

Her family, Claudia asserts, keeps her sane. “They really believe in me, and they are my main support system for sure.”

When all is said and done, the surprisingly grown-up starlet never loses sight of the fact that fame can be fleeting.

“At the end of the day I know that this all can go away,” she said. “I know that my show can get canceled, the movie can be a big flop, the record won’t make any money, and Hollywood will swallow me up and spit me out as fast as they can say my name. So I always like keeping my feet planted firmly on the ground, knowing that every day doing this is a blessing.”

1 .She’s got some serious writing skills

Last year, she wrote a short film that was going to go into production but had to be postponed when she couldn’t find the right actors. She calls it “a priority.”

2. She doesn’t hate the paparazzi

Sure, it’s annoying when the photogs crash her coffee dates with Garrett, but this sweet celebrity says she understands they are just trying to do their job. (Although, she jokes, some of them could do it in a less creepy way!)

She and her friends love playing laser tag, and it has also become a favorite pastime for the Hart of Dixie cast — including pregnant actress Jaime King!

4. She has a major sweet tooth

She says her cravings consist of everything from cupcakes to crepes, with her most treasured tasty vice being Nutella. She eats what she loves and doesn’t worry about her weight — she just balances it out by hitting the gym harder on days after she indulges.

During the little downtime Claudia has, she loves going to yoga classes. She calls them the Zen in her life that allows her to focus on her well-being.