The season finale of True Blood Season 6 is right around the corner and enough with the sadness. We could use a good fix of shirtless men and snarky comments before it goes. 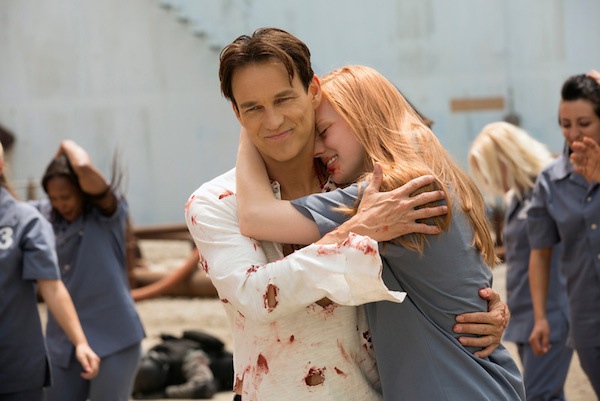 True Blood‘s Season 6 finale airs this Sunday. Last week’s episode was such a goodie, full of all the vampire deaths we love while paying homage to character’s lost. Let’s have a finale that keep it going. Here are the Top 10 things we want to see:

I don’t think it’s going to happen. Sure, Sookie (Anna Paquin) likes Warlow, but she really doesn’t want to be his vampire bride. Not yet, at least. Don’t forget, just a few episodes ago she told Sam she always thought they would end up together. There are too many unresolved issues for that girl to just give her soul to Warlow. Still, it would mix things up and definitely be entertaining.

Jason lets her live and off she goes. She’s just lost everything, though, so where is she driving? I don’t think we’ve seen the end of her character, otherwise they would have just killed her off. Her days of stirring up trouble aren’t over. We want to see where she goes next.

Warlow has him trapped in some other dimension and no one seems to miss him all that much. Sure, Sookie has left messages asking Jason where he is, but they haven’t actually gone looking for him. It seems like Sookie should know Warlow banished him before she decides to let him turn her.

Now that all the Hep V is out of the bottles, let’s see the good stuff back in circulation. Maybe then the vampires can find a way back into normal society with the rest of humanity. They’ve been banished and trapped at Vamp Camp long enough.

I’m still not totally over Alcide’s trip to the dark side. He did some really mean things that he doesn’t get to just come back from. He’s slowly making his return, but let’s see a really stand-out good deed in the season finale, yeah? Preferably a stand-out good deed that doesn’t involve his shirt.

He flew away even though a sad Pam asked him not to leave. So where’s he headed? And will he be back? We’re hoping that’s not all the Eric (Alexander Skarsgård) we get this season. Who will take care of baby vamp Willa? Plus, let’s be honest, he hasn’t been shirtless enough this season.

Andy is finally settling in to fatherhood. Now that Bill (Stephen Moyer) doesn’t need her blood anymore, maybe she can have a normal teen life for a bit. We suspect Sookie might be the perfect mentor to help her get there. Maybe she’ll even get a job at Merlotte’s.

Now that the vampires almost drained him entirely of Lilith’s blood, will Bill go back to normal? Or maybe all the vampires will start having Lilith visions? We sure hope not. It’s time for Bill to be Vampire Bill, not Billith.

We definitely didn’t forget about the new hottie on the scene. We still think Jessica and Jason will find their way back to romance but, until they do, James is fun to look at. Plus, he’s a vampire with a soul so he and Jessica make a pretty cute couple.

Girl’s been around way too long. It’s time for her to go and stop torturing Bill, Warlow, Sookie and everyone else in Bon Temps. Bill has saved the day. Now she can leave.