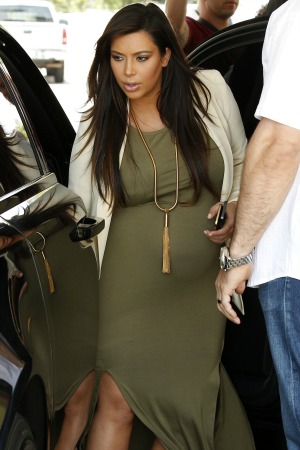 Kim Kardashian has been keeping herself happily at home since giving birth to little North West. So far, the new mom has made just one appearance and that was only in a very brief video to congratulate her mother on her new talk show. In the video, Kardashian said she was “just loving life a little bit too much at home right now” to give her congrats in person.

Kardashian is apparently hard at work trying to lose the weight she gained from her pregnancy and sources have reported that she’s already off to a good start. But so far, baby North’s mom has been reluctant to show herself in public.

Well, TMZ reports that Kardashian has finally made her first (full body) public appearance. They’ve got a photo showing the new mom with Kanye West and baby North West going to a doctor’s appointment in Los Angeles.

The photo shows everyone looking happy, but it doesn’t reveal a lot of Kardashian’s post-baby body. Apparently she’s still keeping that under wraps and chose to head to the doctor’s wearing a big, baggy button-down shirt with a jacket tied around her waist, paired with what looks like sweat pants and some moccasin boots.

Though little North is in the photo, she has yet to make her first appearance in public. The baby made her way into the doctor’s office in a car seat covered in a white blanket. As to exactly how she will make her first debut to the world, no one knows for sure. While her parents have made it clear that photos of North West will never be for sale (they reportedly turned down an offer for $3 million), Kris Jenner has hinted that that may not be the case and it could be that the baby will make her first appearance on the pages of Vogue.