He nearly had it all, and now is struggling to make ends meet. What happened to American Idol runner-up Justin Guarini? 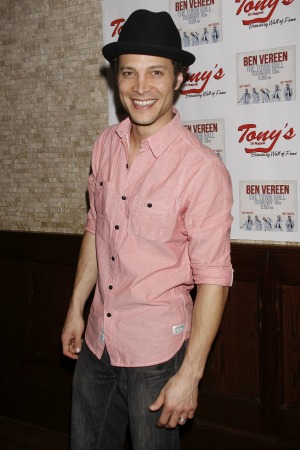 True fact: American Idol has only produced two true idols after all these years, Kelly Clarkson and Carrie Underwood. While a few others have achieved marginal success, like Chris Daughtry, Katharine McPhee and Clay Aiken, the other Top 5’s are languishing in obscurity after getting that tantalizing taste of fame.

Justin Guarini was a favorite to win Season 1 of American Idol, but his crazy curly mop was swept aside by Kelly Clarkson and her powerful pipes in 2002. While he was able to parlay his fame into a little career success, including a couple of American Idol tours and the flick From Justin to Kelly, his 15 minutes is long since up — and now this married father of two is struggling.

“I’m unafraid to say that I am terrified,” Guarini confessed on his blog yesterday. “I am struggling to make each day meet the next without breaking down and curling up. Sometimes I envy people who sit at a desk all day (at least you know where your next meal is coming from). I’ll smile, and laugh, and joke, and entertain…because sometimes it’s the only way to keep the ghosts of regret and loss at bay. I am unafraid to be afraid, and in that fear I gather strength.”

“There was a time when I could have thrown down cash for a house, and had any number of lovers in and out the door. A flashy car and clothes to match. An ego to trump them all.”

“Now I rent a home filled with love. I have a wife whom I love and who loves me (me!) and who lifts me up. Children who give me cherubic-lipped kisses before I leave for work and who are the most delicious morsels of joy and peace and prosperity. I drive a family oriented import, that is over mileage. My clothes are a mixture of gift-suite holdovers, things I bought when I had money but no style, and H&M (I LOVE that place…total whore for ‘em). My ego, is blessedly humble (still sizable, as I think it should be for everyone…but only seeking to respect self, not to put others down in order to raise the self up).”

But things might be looking up for Guarini. The singer nabbed the role of Paris in the Broadway production of Romeo and Juliet starring Orlando Bloom. You can catch him on stage in September.