Young supherheroes are just like the rest of us. They have to deal with peer pressure, social awkwardness and bullies, specifically mean girls. In Kick-Ass 2, Chloe Grace Moretz goes up against some teen terrors. 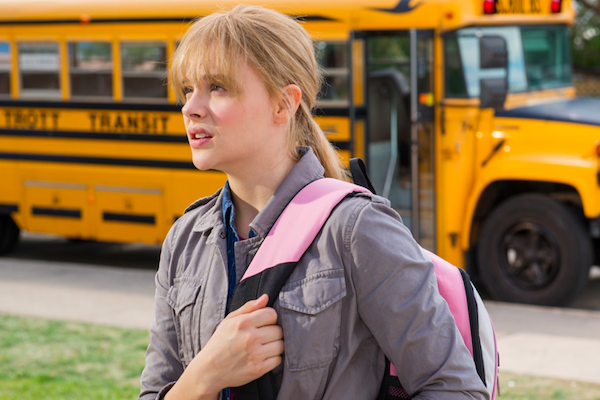 This weekend, Chloe Grace Moretz slips back into her superhero shoes for Kick-Ass 2. It’s a sequel to the 2010 comic book movie where she first appeared as Hit-Girl. In the original, she was a pint-sized 11-year-old with a foul mouth and a deadly fist.

This time around, Hit-Girl aka Mindy Macready is tackling her biggest obstacle yet — high school. Adolescence is a trying time where you’re desperate to find your place in the world. For Mindy, it’s extra difficult because of her unconventional childhood.

According to USA Today, the character’s coming-of-age story is why Moretz wanted to reprise the role.

“That’s what I really wanted to show and portray in this film, Moretz says. “The girl behind the wig and the mask, the innocent kid who was psychologically twisted by her dad to become a killing machine and who lost her father in front of her eyes and has now been adopted by a cop.”

Chloe Moretz is a tormented teen in new Carrie trailer >>

“That is what people really relate to are those mean girls, and those girls who don’t have to beat you up physically but will emotionally torture you and emotionally beat you until you are nothing,” she explains.

How to deal with a mean girl >>

“It’s nice seeing roles like this where you can overcome it — emotionally you can become a stronger person and know that no matter what, there will always be bad people.”

The secret is to keep on moving. We’ve all been there, and are stronger because of it.