Fifty Shades Shades of Grey has kept E.L. James rolling in dough. The author is leaving her peers in the dust as she tops Forbes‘ list of highest-earning authors. 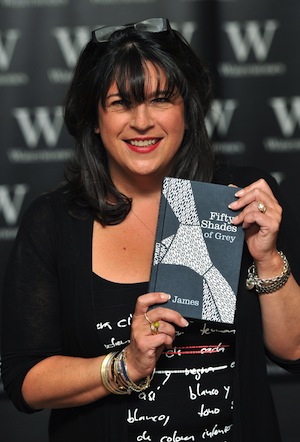 Who says Fifty Shades of Grey doesn’t have staying power? The salacious book, which is a New York Times bestseller, continues to rake in the dough. According to Forbes, it pushed writer E.L. James to the top of their top-earning author’s list.

James turned her Twilight fan fiction into her own million-dollar baby. She raked in an estimated $95 million between June 2012 and June 2013. In addition to that impressive amount, James’ greatest feat is having a book that sold more copies faster than any other author. When it hit U.S. shelves, over 70 million copies were sold in just eight months.

Fifty Shades of Grey has become a huge part of pop culture. It’s an inside joke that everyone’s in on. Hollywood came knocking and gave James a cool $5 million to adapt it for the big screen. While waiting for the movie, she’s hard at work on another top secret novel. We wonder if it will be as risqué?

Steamy 50 Shades of Grey movie gets a release date >>

Check out the complete list of Forbes‘ top-earning authors below:

What do you think of this year’s list? Are you a fan of these authors’ work?