Teresa and Joe Giudice have maintained their innocence over the federal fraud charges against them. They were in court on Wednesday to plead their case. 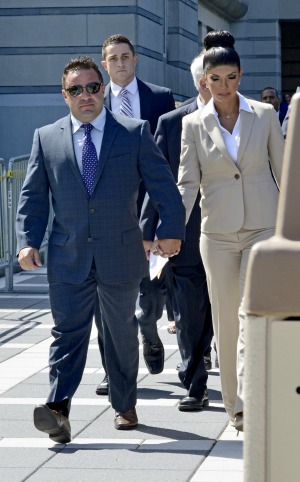 They have claimed their innocence throughout this entire ordeal and now they have officially pled not guilty. On Wednesday, Teresa and Joe Giudice appeared in federal court in Newark, New Jersey to state their case.

The Real Housewives of New Jersey stars are currently facing 39 counts of federal fraud charges. They are each out on $500,000 bail. The charges stem from reportedly applying for loans by exaggerating their income and eventually hiding their money during a bankruptcy filing.

Their respective lawyers spoke for them, but the couple looked pretty glum throughout their appearance, according to the NY Daily News.

Miles Feinstein, Joe Giudice’s lawyer, told the press before they headed into the courthouse, “They vehemently deny their guilt. There’s an assumption of innocence and they vehemently assert their innocence.”

If the reality stars are convicted, they each face up to 50 years in prison. The 43-year-old dad could also be deported because he is not a U.S. citizen, he is a citizen of Italy.

His lawyer claimed, “Joe didn’t know he wasn’t a citizen. The rest of his family is. Had he known and applied for citizenship he certainly would have gotten it.”

Feinstein cleared up the rumors that Joe was going to testify against his 41-year-old wife.

The lawyer shared, “He’ll do anything to help Teresa, but he’d never ever testify against her.”

Teresa has been on the Bravo reality show since its inception in 2009. She’s made quite a fortune off of her Skinny Italian line of cookbooks and food. The mother of four is also paid $35,000 an episode.

Henry Klingeman, Teresa’s attorney, talked about how the family was holding up under such stress.

He revealed, “They are doing well as a family [and Teresa] is trying to do the things that any good mother would do under the circumstances.”

The couple will be appearing on a RHONJ reunion special, so Andy Cohen will definitely have some serious questions for them.

Their next appearance in court is for a pre-trial hearing on Oct. 3.