At least one person knew Lauren Silverman was cheating with Simon Cowell long before the rest of the world: his ex-girlfriend Carmen Electra. 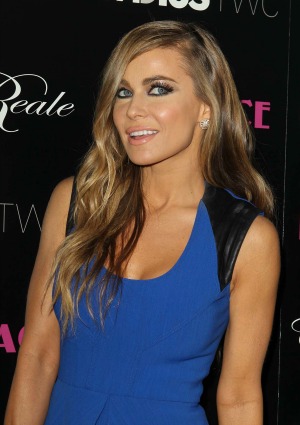 It’s every woman’s worst nightmare: catching your man in bed with someone else. Carmen Electra lived it, but in doing so got wrapped up in one of the juiciest celeb stories of the year!

Remember last winter when Electra was dating Simon Cowell? The relationship seemed to just kind of fizzle out, but the truth behind what happened is much more sordid.

Turns out Electra caught Cowell in bed with another woman — and not just any random woman, but Lauren Silverman, the wife of his former best friend — and Silverman is now pregnant with Cowell’s baby.

“Carmen was at Simon’s house in L.A. when she literally busted him with Lauren,” an insider told E! News. “Simon called her a friend, but there was nothing platonic about what was going on, if you know what I mean.”

“[Electra] high-tailed it out of there. There was no way she was going to stick around and be a third wheel.”

The former Baywatch star decided to keep that little anecdote to herself when asked about Cowell’s sticky situation at the Do Something Awards recently.

“I’m so happy for him!” she gushed to reporters. “What I witnessed working with him on Britain’s Got Talent and coming to see him during X Factor is that the people he truly believes in, he stands up for them and supports them. So I obviously think that his child will be very well taken care and very, very loved.”

“I’m going to call him as soon as I get in the car after the event,” she added. “I want to know if it’s a boy or a girl. It’s awesome, I’m super happy for him.”