Actress Famke Janssen came home on Saturday night to discover that someone had broken into her home and left a children’s book next to her bed. Talk about creepy. 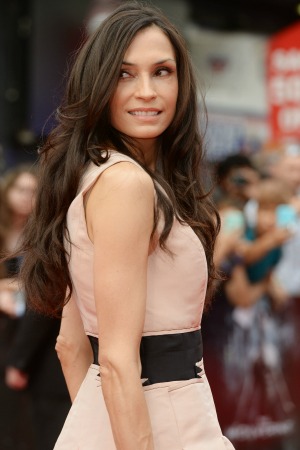 Imagine coming home one night and walking into your bedroom to find something there that didn’t belong to you. That’s exactly what happened to actress Famke Janssen (X-Men, Hemlock Grove) on Saturday.

10 things to know before watching Wolverine >>

The New York Daily News reports that Janssen filed a report with the NYPD after discovering that someone had been in her home. Janssen reported that an “intruder entered her apartment and placed a book called The Lonely Doll on a shelf beside her bed,” a source told the News.

Cops immediately went to her home to investigate, but found no evidence of forced entry, just the creepy children’s book. Janssen told officers that the book was definitely not hers and that no one else had access to her penthouse.

A quick check online reveals that the book in question was published in 1957. The image on the cover shows a doll with what can only be described as an evil look on her face, reading a book. Another image in the book shows the doll hiding her head near a window.

Celebrity names: How do you pronounce that?! >>

The first page from the book reads:

“Once there was a little doll. Her name was Edith. She lived in a nice house and had everything she needed except someone to play with. She was very lonely!”

What message could the intruder have been trying to give to Janssen? Was this some sort of stalker looking for attention by saying they were lonely like the doll in the book? Or could it be that the person was trying to say that Janssen was the lonely doll, living in a fancy penthouse with lots of luxuries but no one there to share them with? Either way, it’s enough to make the hairs stand up on the back of your head.

Of course it’s always possible that the whole thing was done as some sort of silly prank. Either way, hopefully police will find the culprit soon so that Janssen can feel secure in her home again.