Lady Gaga has revealed that she tried to channel the King of Pop, Michael Jackson, for inspiration on her latest album, ARTPOP. 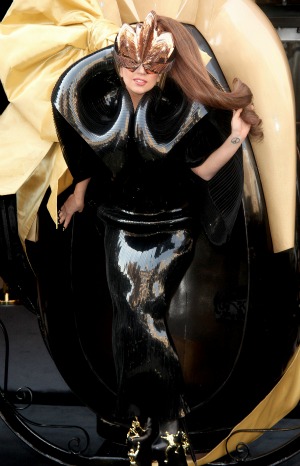 Lady Gaga‘s latest album has been eagerly awaited by fans. In fact, it appears that some people just couldn’t wait as a few of the songstress’ singles were even leaked online and the singer was forced to rush-release her single “Applause” on Monday.

So what was the inspiration behind the legendary music star’s new recorded album ARTPOP?

Gaga has revealed that she tried to channel the late King of Pop, Michael Jackson, by wearing several items from his wardrobe.

Gaga was lucky enough to win 55 personal items from Jackson’s wardrobe — the pieces even include one of his famous Swarovski-encrusted white gloves —that were won at a Beverly Hills auction house in December.

In a radio interview with On Air with Ryan Seacrest, the singer said, “I recently bought a bunch of Michael Jackson’s clothes — his actual clothes from his tours. The idea was to keep them for him. I actually don’t really want to wear them; they’re Michael’s clothes.”

“[But] there’s a couple of pieces I have to the side and I have his sweaters that I put on — I wear that when we’re mixing and finish up a record. I feel something from the clothing.”

Not only does Lady Gaga have Jackson’s incredible wardrobe for herself, she also has gifted some of the items to the late singer’s relatives.

Gaga continued, “I gave one of the sweaters to his godson and he really loved that. I just feel through clothes you can feel things.”

“The 55 pieces I collected today will be archived and expertly cared for in the spirit and love of Michael Jackson, his bravery and his fans worldwide,” she said.

Gaga’s recent single “Applause” was forced to be released early, after having been leaked online, as well as a duet with Cher called “The Greatest Thing” and Cher is very upset about the fact that her collaboration was leaked, responding with some very strongly worded tweets.