Poor Ezra’s been living in a lie and just as his world comes crashing down around him, Aria’s seems to be coming together again. Is it too late for them? 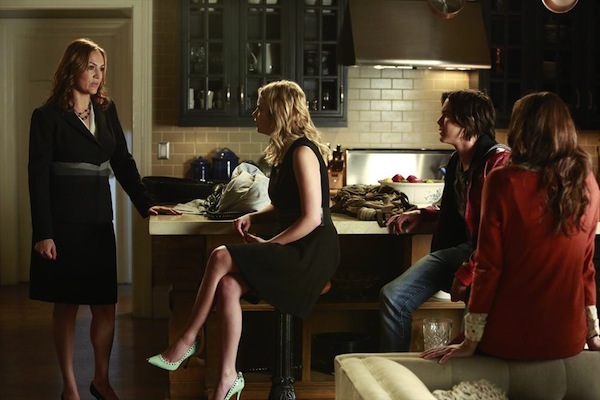 The girls on Pretty Little Liars are still running around like chickens with their heads cut off as A swings the sword. Not much new there. Ezra is a different story. Remember that idea of establishing paternity he had on last week’s episode? Yeah, not such a good idea. We’re torn between feeling really sad about it and praying this means he and Aria (Lucy Hale) are on the up and up. If only she didn’t spend this episode making out with Jake.

This week, Emily (Shay Mitchell) moves in temporarily with the DiLaurentis family while her house is under construction. Her mom is out of town for a few days so Emily is alone and not very pleased about it. Mrs. D has kept the house like a shrine to Alison and it creeps the girls out.

Until they discover Mrs. D is going through a divorce. Alison’s mother also has a heart to heart with Emily and, suddenly, the situation isn’t so creepy as it is sad. The woman just really misses her daughter.

Wren’s got a secret

Mona is sticking to her story that she killed Wilden. Wren doesn’t believe her either, but she counters that she doesn’t trust where his loyalties lie. He plays dumb. Turns out, Wren has secrets of his own concerning A.

Toby receives a manila envelope that has his sheet music from A. The music is a song Toby’s mother used to play. There’s a note attached that Dr. Palmer may know something more so Toby goes to talk to him.

Toby shows Dr. Palmer the music but he doesn’t relate it to Toby’s mother. It isn’t until Spencer (Troian Bellisario) plays the song that Dr. Palmer begins to have hallucinations about being back with Toby’s mother. In his state, Dr. Palmer asks the nurse to show Mrs. DiLaurentis to the lobby.

The girls ask Mrs. D about Dr. Palmer’s recollections of her. She says she was only there once, when Alison and CeCe played a prank on her, making her think Alison had been admitted as a patient. 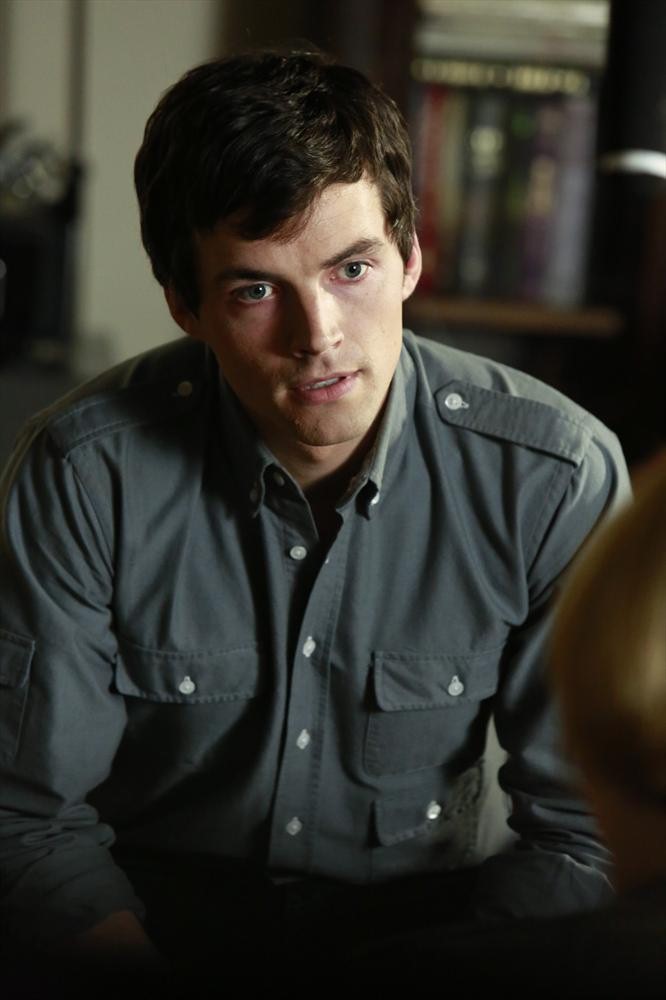 So much for Malcolm staying

Ezra confronts Maggie about his paternity rights. He got a DNA test. Ezra isn’t the father.

Maggie admits she had an affair while she and Ezra were together.

Ezra is incredibly distraught because he’s in love with Malcolm. He doesn’t know what to do and calls Aria in his sadness. She’s out with Jake and doesn’t answer.

Hanna (Ashley Benson) wants to get into Radley to see Mona. Caleb encourages Hanna to go to her parents and the cops and tell them A is back. At least there’s one voice of reason!

Hanna doesn’t listen but finds Wren at the coffee house and asks to see Mona. Wren admits someone tried to get into Mona’s room last night. The girl was described as a young blonde. It wasn’t Hanna.

After Hanna leaves, Wren makes a call and says to the person on the phone that they have a problem.

There’s a squatter at Mrs. D’s

Hanna catches Caleb going to Veronica’s office. He was going to tell Veronica about A. He explains that he just wants to keep Hanna safe, and she understands.

Hanna goes to Alison’s room looking for Emily. Emily isn’t there but Hanna isn’t alone. A girl in a red coat with an Alison mask walks behind the mirror. Hanna doesn’t see her.

Mrs. D and Emily discover someone has been using the basement of the DiLaurentis house as a home. When Emily turns off the lights, she discovers holes in the floor where someone could look through to the kitchen.

Wren visits Veronica to warn her Mona is dangerous, which causes Veronica to visit Mona at Radley. She tells Mona that if she’s playing a game, Veronica will make sure she rots in jail until she’s gray.

After the visit, someone accuses Veronica of obstruction of justice. They’re saying she bullied Mona into a fake confession. Veronica has to recuse herself.