Mayim Bialik has always been an open book when it comes to her parenting choices. She’s now opening up about her divorce to talk about her experiences. 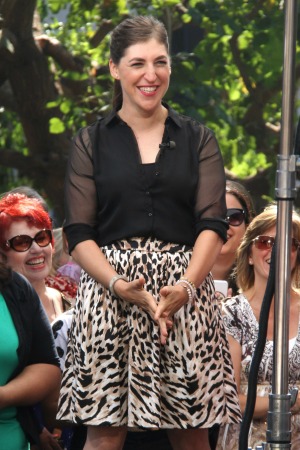 Divorce isn’t easy for anyone, but Mayim Bialik decided to talk openly about her divorce with the public. She blogged about the process for the Jewish parenting site, Kveller.com.

In a recent interview with Access Hollywood Live, she told host Kit Hoover and guest host Alfonso Ribeiro why she made that difficult decision.

Bialik shared, “I wanted to write about some of the more complicated aspects. And specifically, also, there’s certain things [related] to Jewish divorce that people don’t know about.”

“There’s something called a ‘Get,'” the 37-year-old explained. “There’s a religious process. You sit in the same room and you watch your divorce deed be written. It’s actually a very interesting thousands-year-old-document that you watch written and you have to be in the same room as your ex.”

While the process may sound painful for some people, the mother of two found the ritual to be healing for her and her ex-husband, Michael Stone.

She revealed, “To me, it was a very cathartic, very emotionally-powerful sense of closure for us. It’s very intense. So I wrote for Kveller about some of those aspects in hopes to kind of maybe [be] helpful to other people or other women.”

9 Celebrity moms who breastfed in public >>

The former Blossom star has always been open about her parenting style and family life. While it draws criticism from some people, she also has many supporters who understand her personal choices.

Bialik has a big fall ahead of her. She is nominated for an Emmy for the second time for Outstanding Supporting Actress In A Comedy Series and her series returns for its seventh season in an hour-long premiere on Sept. 26.